I haven’t gardened in the neighbors’ back yard for a couple of years now. But the neighbors have moved out, the new neighbors haven’t yet moved in and the collards I planted years ago have reseeded themselves and produced some gorgeous greens.

I harvested some. They were delicious.

I went to check on the zucchini, having somewhat forgotten about it, and discovered a very large tromboncino specimen.  I also was reminded I had planted some green beans.  And that’s great, because I love fresh green beans.

Aside from the fact the raspberries are producing already, I also found a few volunteer potatoes in the compost pile.  They were all delicious!

I can’t remember when I planted the hardy kiwi, but perhaps fall of 2009 or spring of 2010.  As I mentioned in this post, I was hoping for some kiwi, but mostly wanted green growth on the pergola.  I’ve gotten what I mostly wanted, for sure.  The kiwi looks great on the pergola and I love the way the front porch looks in general.

This is the first year I’ve seen it flower!  Both female plants put out a few flowers.  The male plant (the one in the middle) produced nothing.  So I’m guessing pollination is a no-go until that happens, if ever.

In looking at the photos from 2009, I’m surprised at how much the flowering plum tree has grown.  The porch was always shaded for most of the day, but now it’s shaded for much more of the day, which doesn’t bode well for kiwi production, even hardy kiwi production that doesn’t need as much sun.  Oh well.  The greenery is great!

Needing something that takes up a lot of space in the garden, I settled on squash.  I planted my last five Oregon Sweet Meat seeds (the variety was selected and developed by Carol Deppe, my favorite gardening writer) and also started a few delicata seeds I’d saved from a few years ago. They sprouted!  I moved them to the back porch and have been covering them at night with Nancy’s Yogurt containers to keep them warm.  Fingers crossed!

I’m keeping up with it this year.  Here’s today’s harvest.  Every two to three days I get a handful like this.  It’s pretty awesome and has been a long time in coming. 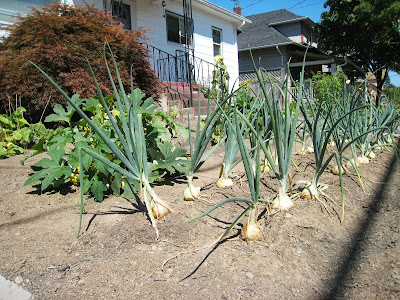 Sometimes the thing that bugs me the most about gardening is that it is messy, with things flopping hither and yon.  Not these onions.  These are precision, man.
My neighbor alerted me that Burpee was giving away free produce and plant starts near my house, so I stopped by after work. I got tomatoes, peppers, cucumbers and a pepper plant (which is going to be very cold, poor thing).  I also got a booklet about growing plants. Here’s a bit of hardy kiwi. And here’s a bit of black current. I remembered that I never finished harvesting the German Butterball potatoes last fall and dug up a pound of them.  They were in great shape, just muddier than if I had pulled them out of the ground last September.  I roasted them up and, man, were they good.  They were so good, I just had a double helping and called that dinner.