I’m in the market for a new bag and I liked this one.

It has a circle of fabric on the bottom, sides going up with a long opening for slinging over the shoulder. 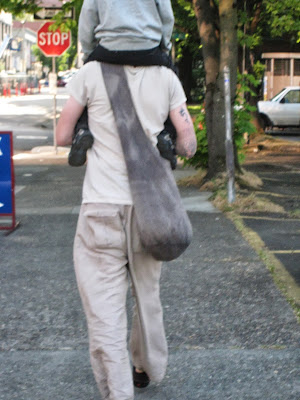 I don’t like how everything would sink to the bottom, but perhaps I could add pockets or something.

For those of you who don’t want to spend the four minutes listening, I’ve transcribed some choice bon mots to convince you to invest those four minutes.

“Who wants to read the Taming of the Shrew? You basically have to translate it from Shakespeare into English, when there is already an excellent filmic translation avaliable in the form of  10 Things I Hate About You.“

“But yes, your teachers may be stupid.  So are you, so am I, so is everyone (except Neil Degrasse Tyson).  The whole pleasure of being a human is in being stupid, but learning to be less stupid together.”

“I pay for your schools because I want you to grow up and make my life better.”

“Your education is not just about you. Your nation is making an investment in you because they believe you are worth it.”

That yellow thing on top of my normal red comforter is the comforter from my childhood bedroom. My mom made it to match my yellow room and my love of Holly Hobbie. It was packed away when I got my more sophisticated teenage room and comforter, but I wanted to bring it along to college, in lieu of buying new bedding for my dorm bed. It was warm and comfortable and I slept with it through college and into my early twenties. Due, I’m sure to my need to wear things out before I discard them, right? This comforter even has an ink stain on it from when I got my first tattoo. It has been packed away for the last few years, but I recently unearthed it to have on hand for when I get cold watching movies. It’s starting to fall apart a bit, but it is still warm and has much nostalgia attached to it. It’s also not in good enough shape to give to anyone. What’s a girl to do? Ha-ha! Matt’s mother Linda gave me an Ikea gift card for my birthday and with it I bought a duvet cover. I placed that over my old comforter and the comforter lives on to keep me warm. It mostly lives under the bed where Antares sleeps on it, but I pull it out when I want to take a nap and need a bit of warmth.

I think it looks great and I’m pleased with my re-imagining of this object.

“People ask, is there one word that you have more faith in than any other word, and I’d say it’s participation. I feel that this takes on so many meanings. The composer John Philip Sousa said, ‘What will happen to the American voice now that the phonograph has been invented? Women used to sing lullabies to their children.’ It’s been my lifework, to get participation, whether it’s a union song, or a peace song, civil rights, or a women’s movement, or gay liberation. When you sing, you feel a kind of strength; you think, I’m not alone, there’s a whole batch of us who feel this way. I’m just one person, but it’s almost my religion now to persuade people that even if it’s only you and three others, do something. You and one other, do something. If it’s only you, and you do a good job as a songwriter, people will sing it.”

From The Protest Singer: An Intimate Portrait of Pete Seeger By Alec Wilkinson.

Last night while watching the Oscars, more than one comment was made about the lines around Kate Winslet’s eyes. Age was brought up, children were brought up, but I think it boils down to one reason I love Kate Winslet. She seems entirely unconsumed with the “Hollywood” part of acting, yet remains a Hollywood star. She doesn’t seem to let people push her around about her weight, she followed up the biggest blockbuster of the late 20th century with a strange independent film set in Morocco, and she comes to awards ceremonies with her aging skin on view. Granted, her aging skin is in its early 30s, but still. The above things alone would propel me to see nearly every movie that she makes; the fact that she is an incredible actress is just the cherry on top.

All the rest of you regular people out there, same goes for you. Let us age as we age. There is no fighting age. Let us enjoy it.

But I digress. Because of our severe lack of national holidays, I think you can make up your own. Here is one for the end of February. Watch the Oscars. During the Oscars they usually show a lot of clips from many decades of film. I usually find myself thinking something along the lines of, “You know, I’ve never seen Butch Cassidy and the Sundance Kid.” Make notes of all those movies you have never seen. After the show is over go to the video store (oh, alas East Coast people, the video store has closed. You’ll have to make do) and pick up a bunch of those movies. The next day, call in sick to work and watch them. You won’t be sorry.

I think we should call it Oscar Day.