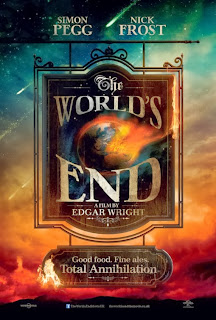 I enjoy a few things about Simon Pegg/Nick Frost/Edgar Wright films: they tend to combine genres in new and exciting ways; they are incredibly silly while also being a bit moving; and mostly I enjoy them because they are funny all the way through.  I saw the preview for this movie upwards of five times, so I was very familiar with those funny bits, and yet there were still more funny bits sustaining the entire length of the film.*

*One would expect this in a comedy, but it’s rather rare, actually.  Most follow the pattern of a bit of funny sprinkled here and there held together with vast swaths of not-funny.  It’s the worst when they’ve exhausted all the funny parts in the previews.