She was my eleventh grade Accelerated English teacher and the rumor was that if you were in her regular English classes, she wasn’t great, but she loved her accelerated students and it would be just fine.  Ms. P. was tall and well kempt, a no-nonsense woman who got things done.  She had five children, and that, in combination with how early they all got married, probably means she was a Mormon, though of the rare sub-types that used “Ms.” and worked for pay.
The rumors weren’t wrong about her preference for her accelerated classes, she sparkled as the year got going.  We proceeded at a fast clip, blasting through the Scarlet Letter, the Crucible and Huckleberry Finn in no time at all.  The two of us shared the same first name, and I made some rather wise observations at the beginning of the year, so things started out okay, but the ardor faded at least on her part.
I hadn’t always been tracked into the smart English class.  Most of junior high had been spent in regular English with the ambivalent readers and disinterested learners, but my ninth grade teacher had been impressed by my writing and suggested I change things for second semester, so I made the switch.  Accelerated English was more fun because people wanted to be there and we could have actual discussions.  And I read and wrote well enough to keep up with the others.  Things were fine that year and in tenth grade.
But ultimately, I was a lazy student.  I did my homework, but didn’t go out of my way to shine things up.  This worked well for other classes, but not for Ms. P’s Accelerated English.  She wanted blood, sweat and tears and I wasn’t really interested in providing any of those things.  Junior year was also a rough time in my mental health world, and the creeping depression that followed me around that year probably didn’t help endear her to me.
I can’t remember an official moment when I realized she didn’t like me, it was more of a gradual process.  There were comments on my work that struck me as rather harsh, and she didn’t choose me for reading aloud anymore.  I think subconsciously I started slacking off and developed an odd habit of forgetting things were due, which meant scrambling to complete assignments 15 minutes before school started.
When the semester changed over, she started bugging me about assignments not turned in.  I had no idea what she was talking about, but agreed to get them to her.  As far as I knew, I had completed everything, but she was the teacher, so who was I to disagree?  I limped through that quarter, not really sure what to do.  I dreaded going to the class, just as much as she seemed to resent me taking up space, but she was the only Accelerated English teacher, so I was stuck with her.  I can still remember the feeling of freedom that came with the sudden realization that I could transfer to a regular English class.
I did just that, explaining to the counselor that things weren’t working so well in my current class.  The counselor spoke with Ms. P. who agreed to let me switch once I had all my work turned in.  There was a tense day or two when I worried what would happen, because I didn’t know what assignments I had missed. My mother finally called Ms. P. directly and asked what I was missing.  There was a silence while she consulted her gradebook and then a longer silence before she finally said, “She seems to have turned everything in.”  When my mother repeated the conversation, I felt like I’d won, but my mother said we’d both lost.
Regular English was spectacularly easy.  We took an entire quarter to read (re-read, in my case) Huckleberry Finn.  Most people couldn’t finish two short chapters per night and the discussion was anemic, but the teacher was impressed by me and I felt happier there than with the strivers.
Despite my frustration with her, I felt oddly connected to Ms. P.  She was kind of like the bad boyfriend you spend too much time trying to figure out.  Why was she so mean to me?  Did I remind her too much of herself?  Was she taking a strict line to motivate me, and that failed spectacularly?  And why did she think I hadn’t turned in assignments I had completed?
After leaving her class, I avoided her, though I saw her in the spring down on the Greenbelt by the river.  She was riding her bike and I was watching my boyfriend skate, which was an activity I both loved and loathed doing.  I remember feeling embarrassed she saw me taking part in such a traditional girlfriend role.  We both pretended not to see each other.
My senior year she was the editor of the school literary magazine and I remember being very surprised when something I submitted won first prize—I figured she would sink anything from me, she was the kind of teacher who was overly involved in the student activities she supervised.  Was she more hands-off than I thought, or was the writing really that good?  It sent me back to puzzling.  One of my friends told me she had asked where I was going to college and seemed pleased to hear I was heading off to a women’s college.  That she would even ask also confused me.

It’s a teacher’s job to get their students to learn, ideally by connecting them with things to love about the subject.  Even then I understood that it is an impossible task to like all your students, so it seemed reasonable—though embarrassing—that this teacher in particular would dislike me.  As an adult, I still wonder what she was thinking, but I don’t fault her for her actions.  She provided a good lesson in searching for what I needed and that sometimes giving up is the best course of action.  It’s not the American tale of striving that we’re all supposed to believe, but it is something that needs to be learned at some time.

What’s weird about this card is that it is a Papyrus card, that looks exactly like any Papyrus card I could buy in any store that sells cards here in the USA. 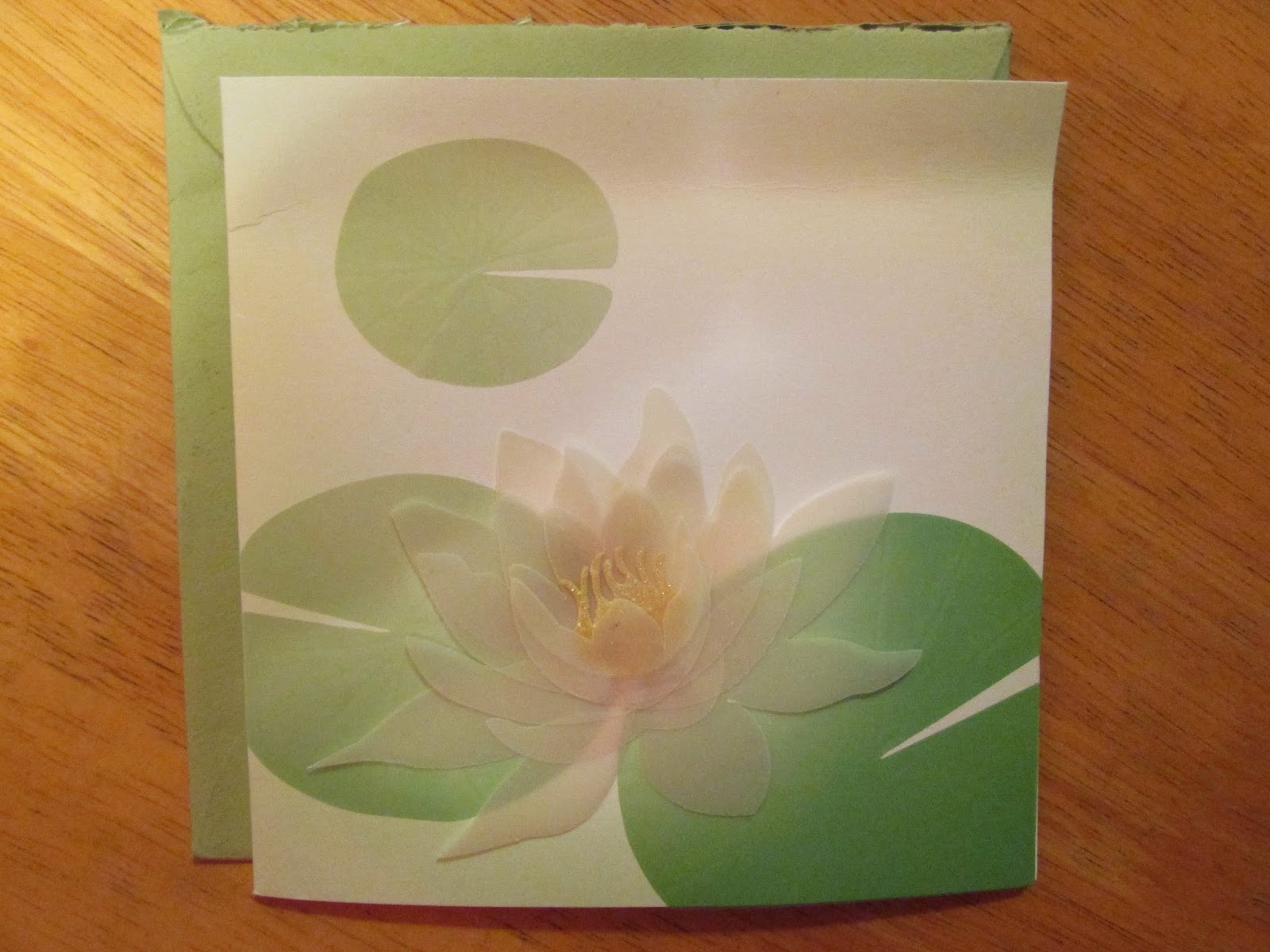 But inside (and apologies, Picasa isn’t uploading to blogs anymore so I have to do it myself and sometimes the orientation thing is off) is Cyrillic!  Crazy! 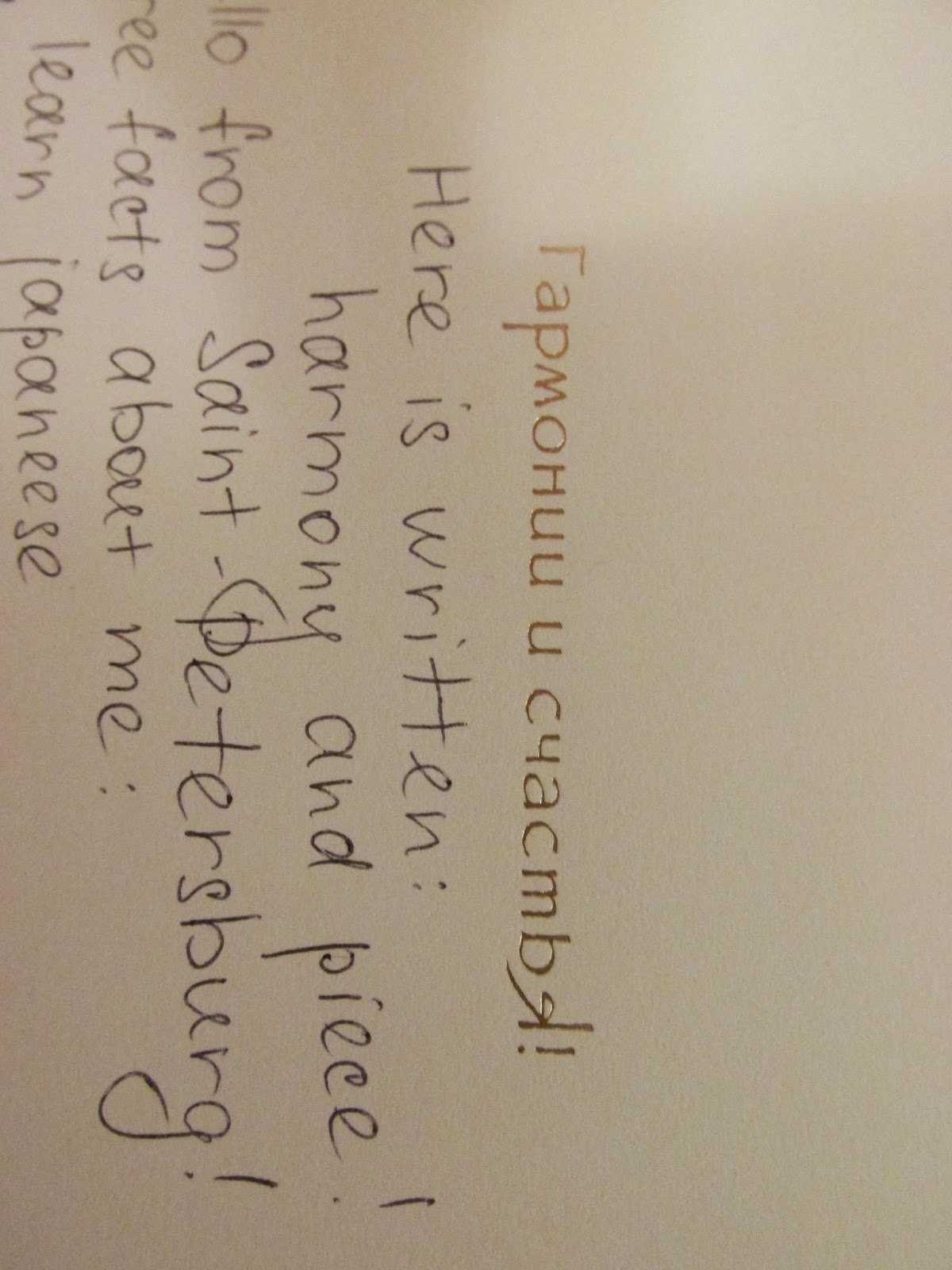 What was written inside said, “Here is written: harmony and piece!”
So great! 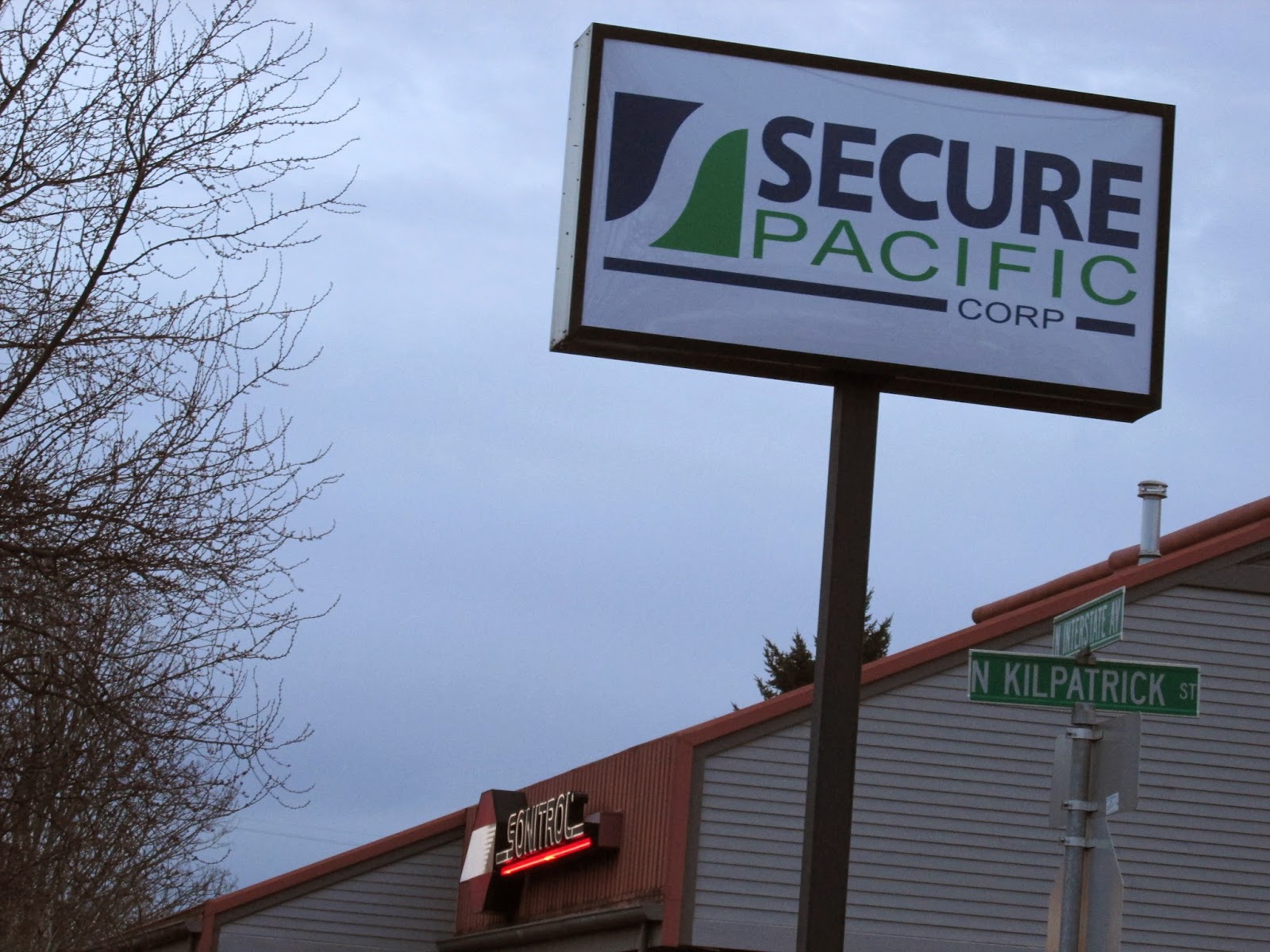 It’s been Sonitrol for the entire time I’ve lived here, but I suspect that something has changed and that Sonitrol sign on the building is not long for this world.
This is from Vladimir.  He hopes I like his postcard.  I do! 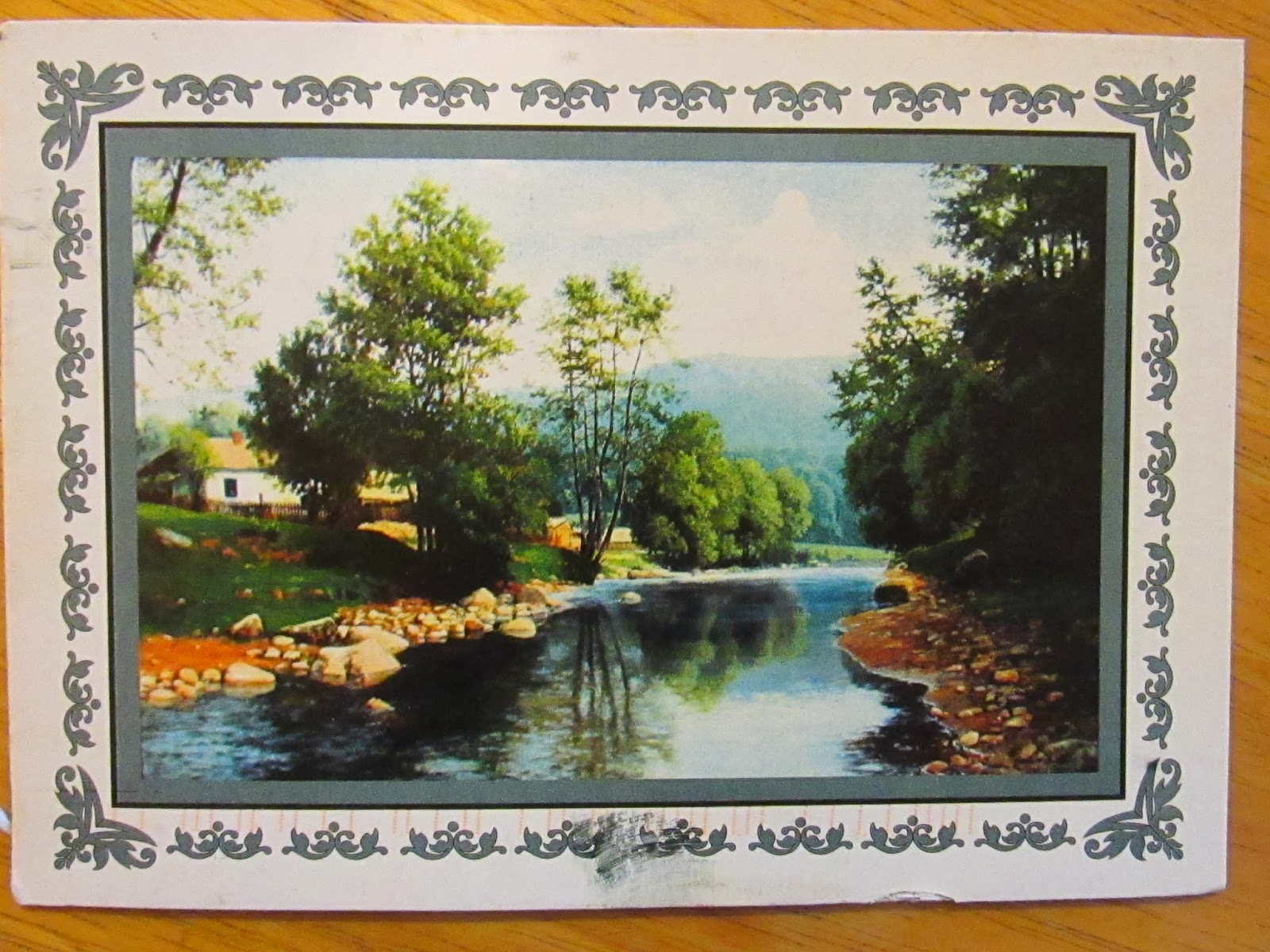 This is from my friend Sara (of Pike Schemes fame) to represent the “real” postcard world. She also sent this postcard, which she made herself.  Astute readers with long memories might remember this picture from this post back in 2012.  I had the photo displayed prominently at my house because I loved it so, but Matt was not as much of a fan and was making noises about throwing it away, so I tucked it into Sara’s Christmas present that year.  And she loved it too.  But now it has come back to me as a beautiful postcard I can hang on my wall.  I love it! 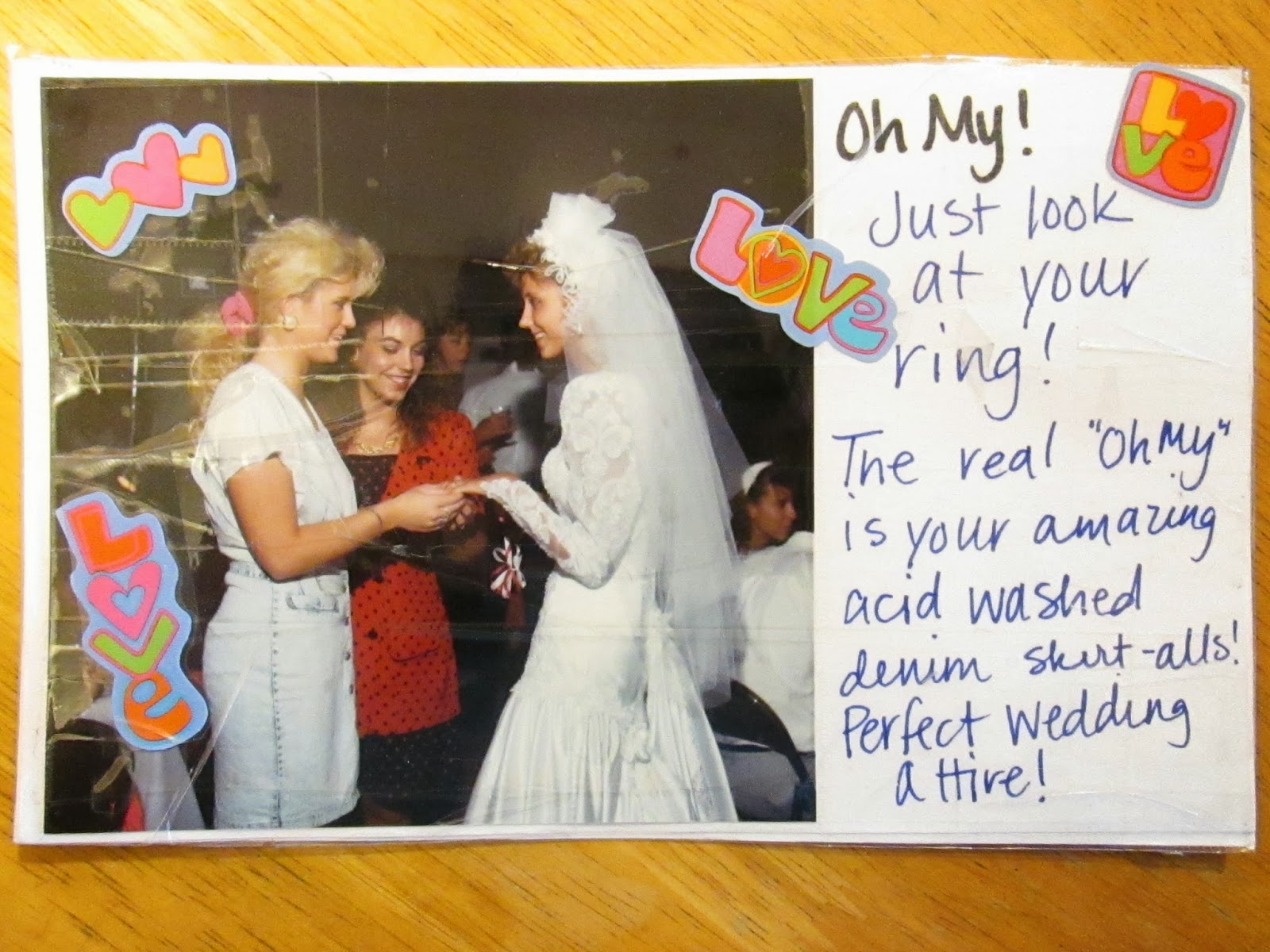 Note from the future.  Several WEEKS after I received this post card, I was weeding out front when the mail carrier came by.  “I just loved that picture of you in the denim overalls at the wedding!” she told me. “I laughed and laughed.”  It took me a moment to figure out what she was talking about, but then I put it together and told her that it wasn’t me in the short-alls, and then gave her the background.  Well done Sara! 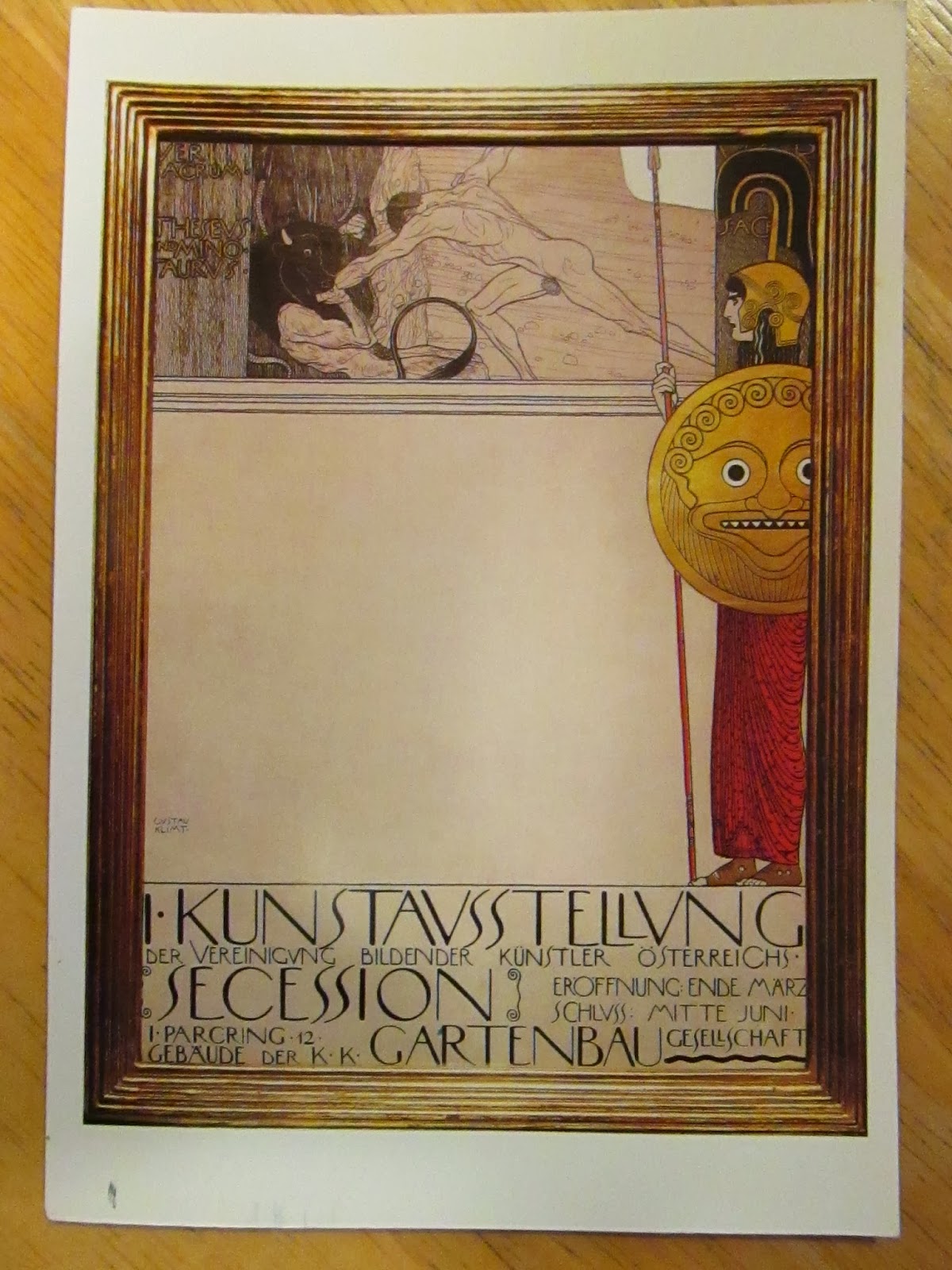 It’s true!  At times, I get postcards from Portland, because I have a friend and we sometimes communicate via postcard.  Why send postcards to people in your own city?  It’s fun!  Plus you can pretend you live in those pre-telephone day, when there was a morning post and an evening post and that was the only way to make plans.  In this case, making plans was exactly what this postcard was all about.  Plus, a quick review of Lone Survivor.

Veronica Mars is an awesome television series.  I would write more, but I’m currently obsessed and must watch more episodes. 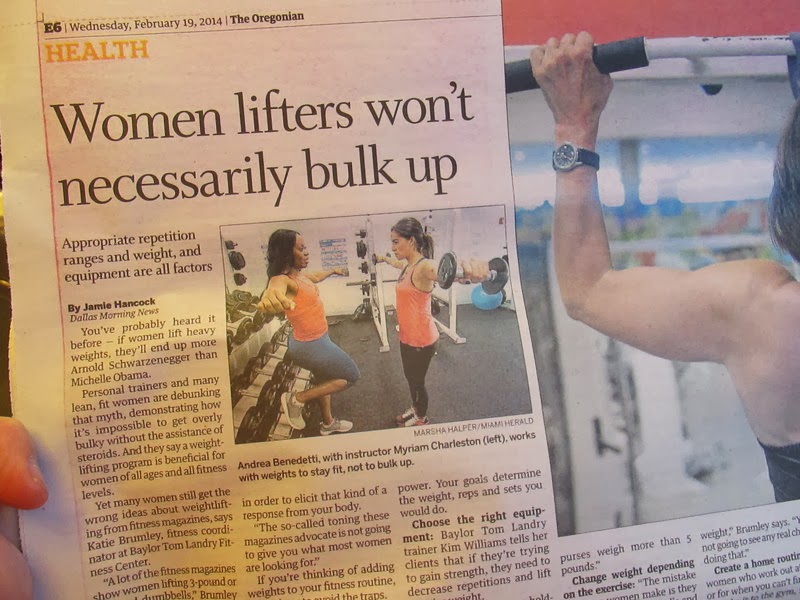 I can’t tell you the number of articles I’ve read over the years about the subject.  It drives me crazy.  Big muscles are very cool.  Quit trying to be diminutive and tiny.
Before, we had the long skinny paper, as pictured on the right.  After, we will have the short, stubby tabloid-style on the left.  But right now?  We have both. 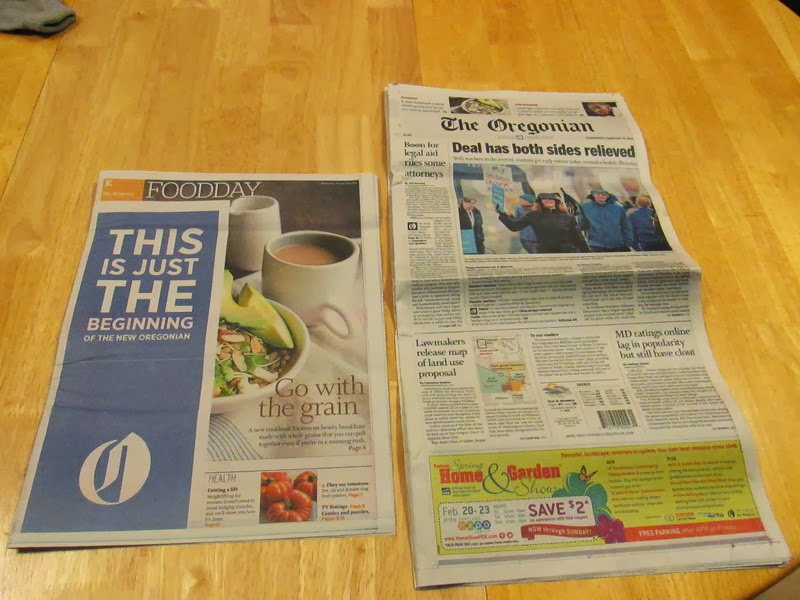 A two-sized paper is annoying for the following reason.  Here is the normal mode of transport for the paper.  It tucks nicely in my bag. 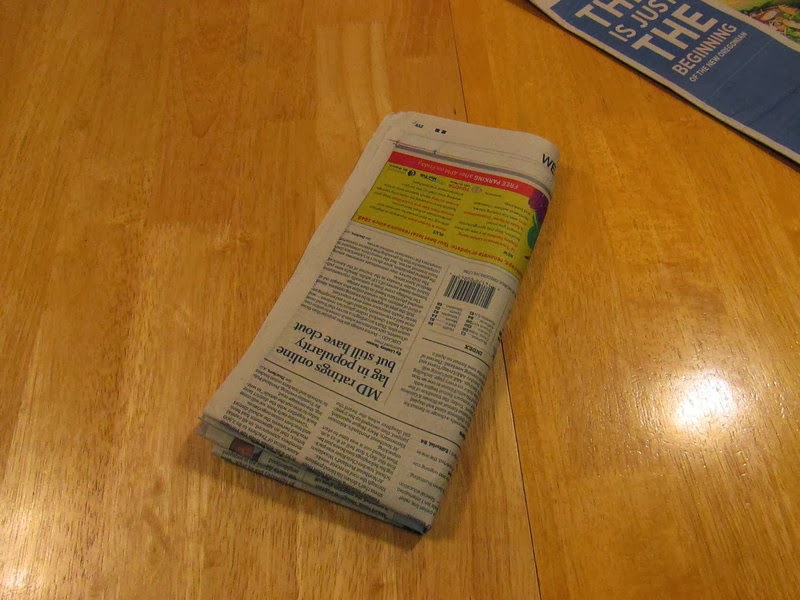 Right now, we have two different sizes, resulting in a hangover flap thing that doesn’t tuck away very easily. 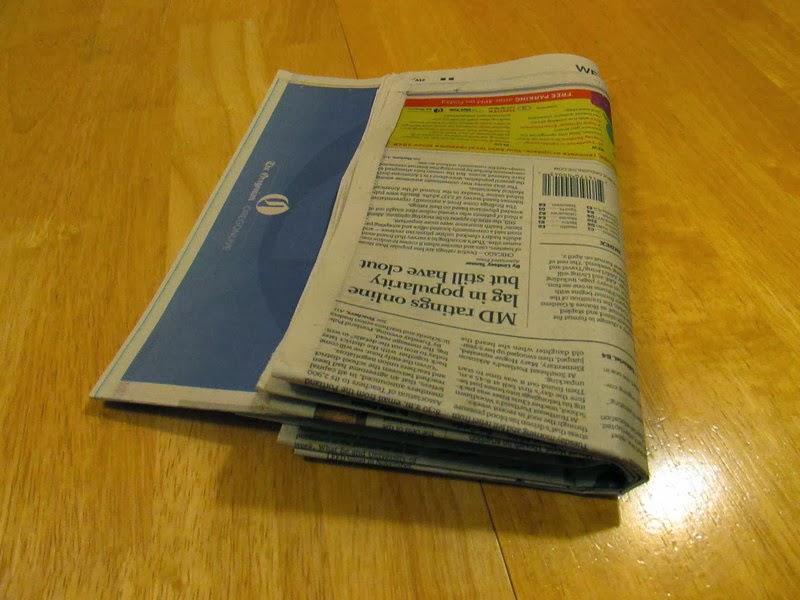 This will last until April, when it all becomes tabloid.
I was held up by this week’s installment of the Wardrobe Architect.  The color thing I wasn’t really interested in doing.  But I buckled down and here are the results.  I think one of my things is that black is the main color (although khaki is creeping in a bit more) and then I wear something that pops, meaning I like a lot of bright or strong colors.  Bright orange is my favorite, but I like bright blue (aqua) or bright green too.  I used Kuler to create these palettes.  As for base colors, I never wear brown, grey or white. 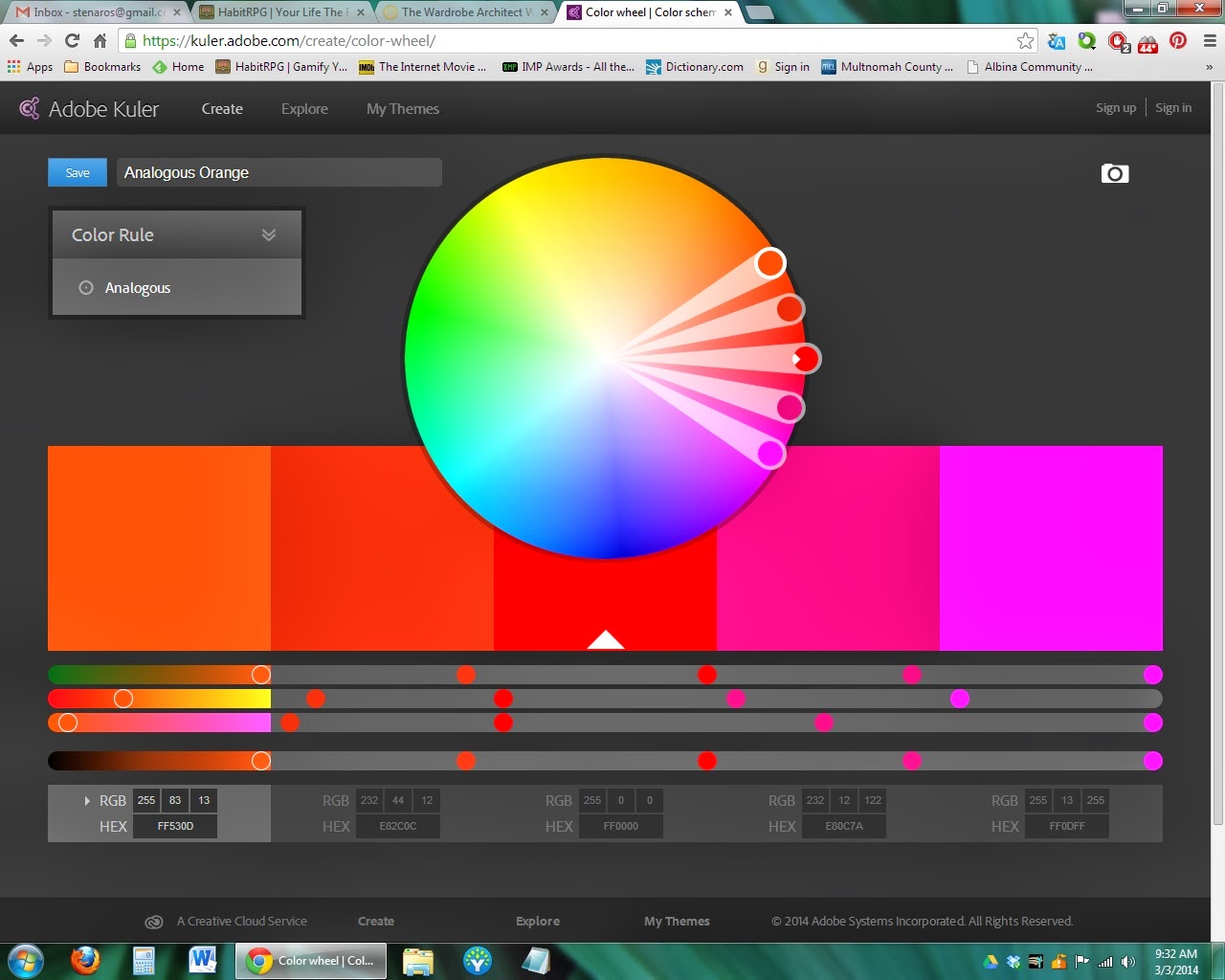 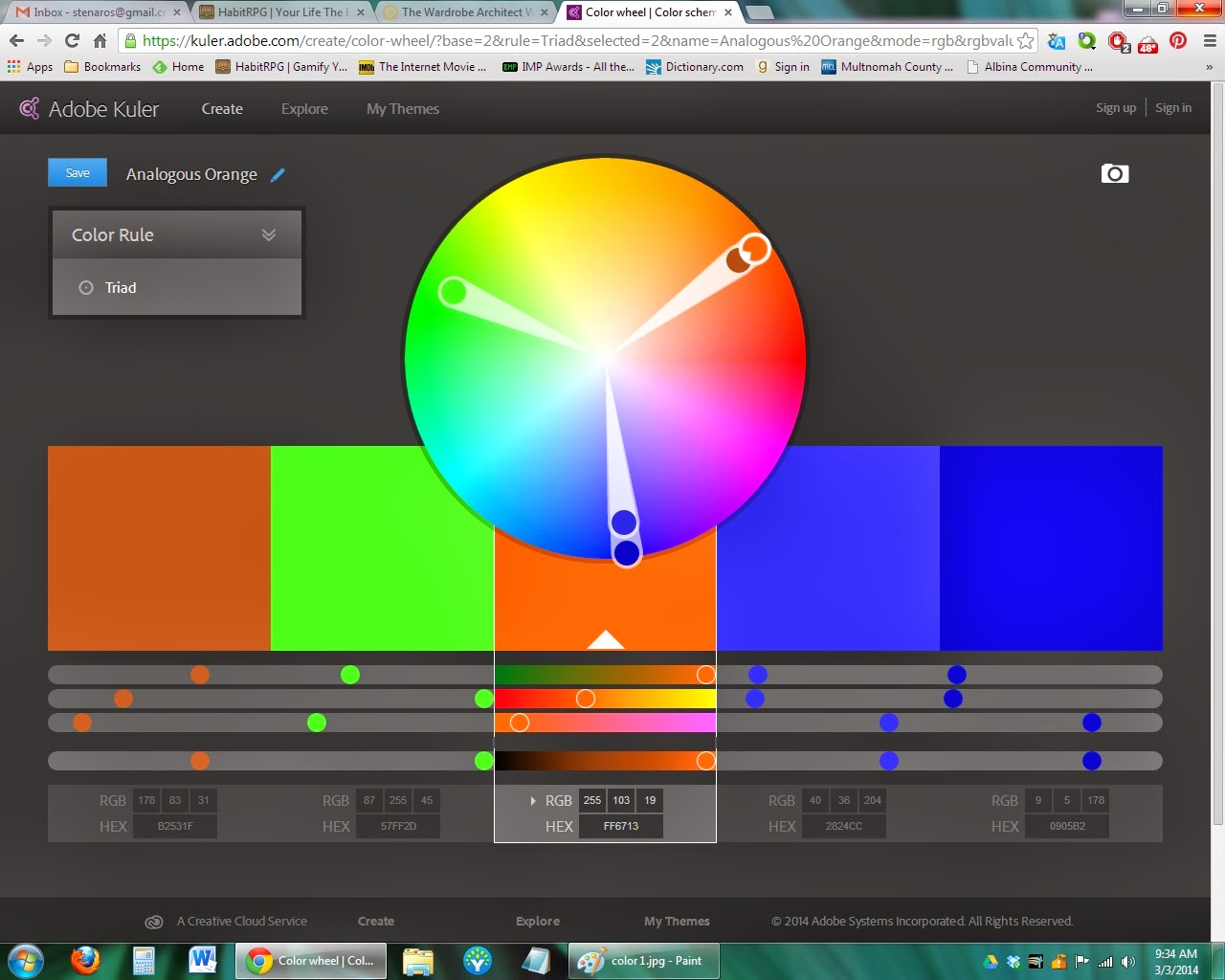 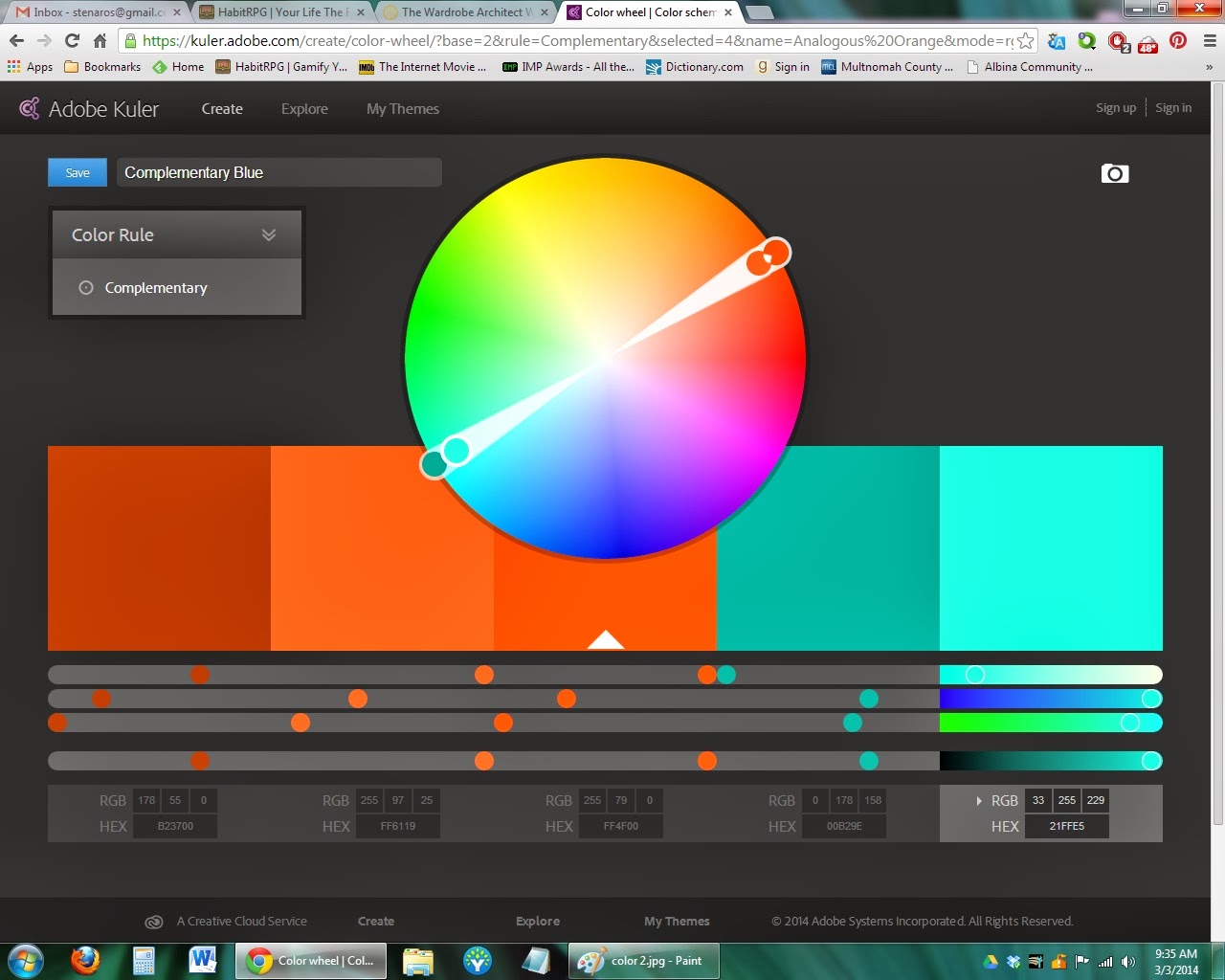 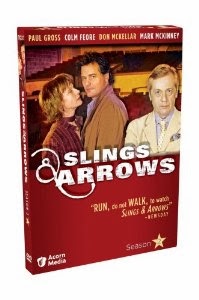 The play this season was Macbeth, which I learned is a very difficult play to stage effectively.  Our leads got up to some amusing shenanigans and some young players got to do the worst Romeo and Juliet ever conceived.  I found this season to be not as funny as the first one, but still enjoyable because the characters are interesting.

Cost:  free from library
Where watched: at home with Matt