Tallulah is a different kind of tooth fairy and we find out about her life in this iconic picture book that I think has much too many big words. Kids will go for the pictures. Adults will go for the concept.

Of note: at the point of reading, the name Margaret Wise Brown meant nothing to me. If I had to guess, it was going to be someone who fought for civil rights in the 1950s. That guess was wrong. I also didn’t know that Margaret Wise Brown wrote The Important Book which would have added to a good base understanding of the structure of this book.

An odd little picture book about the author of Goodnight Moon and other stories. The books establishes Margaret Wise Brown’s uniqueness and also made me quite curious about Anne Carroll Moore, the librarian at the New York Public Library who served as a gatekeeper of children’s books.

Soft illustrations conjure a bygone era. I would have liked more back matter, especially cause of death.

Hanako—an American citizen—moves with her family to Japan after spending several years in a concentration camp (the US called them “relocation centers” or “internment camps”) during World War II.

In Japan, she find grandparents who adore her and her brother and she tries to make her way in this new land. Filled with a lot of visual detail and intermittently illustrated with black and white drawings by Julia Kuo, this is a great novel of starting over when that seems like the best of a bunch of bad choices.

A graphic novel that examines the anxiety and pitfalls of sixth-grade friendships and also the role of girls in the world. It includes good mid-80s details and some good scenes of Lagoon, the amusement park outside of Salt Lake City. It’s also got a pretty awesome fantasy story as written by a very young author, but expertly illustrated.

Brandy Colbert again writes a wonderful novel. In this one, Birdie, a good girl, stretches her wings as she comes of age.

As always, Colbert manages to balance friendships, love interests, parental expectations and her main character’s own interests and wonderings during a summer in Chicago.

How she does this in a brief 325 pager and so regularly is beyond me. If you haven’t checked out her stuff, now’s the time.

It’s 1981, and Hằ ng has recently arrived in the US. She’s looking for her brother who was lost in one of the last airlifts out of Vietnam at the end of the war.

She sets out on her first day in the country and finds Lee Roy, a recent high school graduate and son of college professors, who wants more than anything to be a real rodeo-riding Cowboy. Together the unlikely pair spend a summer figuring out the world as it is presented to them.

Hằ ng’s English words rendered in Viennese words made for hard reading. Though I liked the idea, in practice I mostly skipped over them and hoped that Lee Roy was going to do some summing up.

Also, this book has a scene with flirting via diagramming sentences, which I LOVED.

How many books have I read with Filipino main characters? I suspect it’s close to zero, which is the number that Jay, the main character in this book, has read.

This is a great chronicle of travel to a homeland you’ve never really known. There are current events (President Duterte ) that affect the plot. There’s a lot of loss and sadness, which is always good to explore when boys are main characters.

This book is about female friendship when friends are used as armor, rather than people you deeply care about. There’s also really great Catholic girls’ school stuff and some good commentary about tattoos.

Jessie Ann Foley writes books I want to keep reading, even after they are done.

Looking for a zany road trip book? Cool. You might like this. Second question. How do you feel about abortion?

Aside from the complex policies, opinions, and feelings about the big A, this book touches on how we present ourselves to the world, friendships, and actual relationships vs. how people see them.

This was an enjoyable, breezy read. For those of you who like to have the book read before the movie appears, act now. They’ve already cast it.

A detailed chronicle of Harriet, the anonymous writer of Dear Emma, her college newspaper’s advice column, and how she reacts to being ghosted. Depicts a college life of procrastination, not much studying, and is a great portrait of friendships new and old. Also a retelling of Jane Austen’s Emma.

State of the Union: A Marriage in 10 Parts
Nick Hornby

Ten very brief vignettes of a couple as they meet up in a bar before heading to couple’s therapy.

I continually ran into the problem of not understanding who was talking. Other than that, it was interesting to see the evolution of the marriage.

Another great entry into the (extremely large) WWII canon, this one follows several characters from Mobile, Alabama as they do their part to help the war effort.

This novel fully examines the effects Jim Crow had on characters both white and black with many memorable scenes ranging from horrifying to small moments.

I had no idea that one of my favorite newspaper columnist also writes novels and I will look out for his other books.

Ng’s portrait of two families living in her hometown of Shaker Heights, Ohio was exactly the kind of novel I like.

Without using too many words, Ng builds her story on the friendship between Moody—a life-long resident whose family has lived in Shaker Heights for generations—and Pearl, a newcomer. From this friendship we see all that is good about the suburb and how that goodness can have drawbacks.

The 12 Tribes of Hattie
Ayana Mathis

I think my lack of connection to this book comes from the stories being disconnected from each other. I never could see how the family was all together. Even a family tree at the beginning would have helped.

This is one of those books that I only finished because I had nothing else to read.

Because it happens near Halloween, there’s a costume contest on the Saturday night of our square dancing event. It’s fun to see what people come up with.

Jim and Eileen had great fun dressing up as a gangster and a moll.

Tiffany and Rebecca’s costumes showed off their great gams.

And Tara and Leslie’s turn as Mormon Missionaries won a prize.

I volunteered for the After Hours event at the Hollywood Library this year. This year’s theme: Stranger Things

There were a lot of themed activities (which I didn’t get because I haven’t watched the series, but which Matt assures me were on point) and the usual After Hours things.

This included pizza delivered and exclaiming over costumes.

Plus button making, and this waffle station.

And everyone’s favorite: the running and screaming tag game that happens after the library closes.

As usual, it was a fun night at the Hollywood Library.

Hopefully someone had stopped needing this post-it note. It was nicely nestled against the fallen leaf.

Finding this, I wondered if Found was still around. I thought not, because so many more things are digital now, so what is left to find, but it turns out they are still around! They even sell a set of postcards!

Among the things in Matt’s mother’s storage space: a framed poster of the crew team at Matt’s college.

There he is in all his glory.

The inspiring words on the poster say: The dictionary is the only place where success comes before work. —Vince Lombardi

Thanks to work paying for our tickets, we got to see Mr. Coates talk about his new book the Water Dancer. There was also supposedly a copy of the book we could all read, but I never saw it.

I’ll track it down, though. I enjoy his writing.

Matt has been attending a small-business startup seminar at Mercy Corps and he met Del, who is an artist.

We got to see Del and his art in an exhibit that also included a talk about how the piece was created.

There are some great trees near the office that explode into my favorite color every autumn. And then there are the trees that are still solidly green.

Not completely solidly as it turns out.

I was worried that the construction company was going to tape over all the windows and leave them for weeks, but I worried for nothing. They did one side of the building at a time, and the windows were only covered for one day.

One interesting part of this process was that I learned there is a roller-type tool that is utilized to stick the blue tape on. With that tool, it was a very fast process.

And then, one morning they were painting just as the sun was coming up and I got this silhouette. 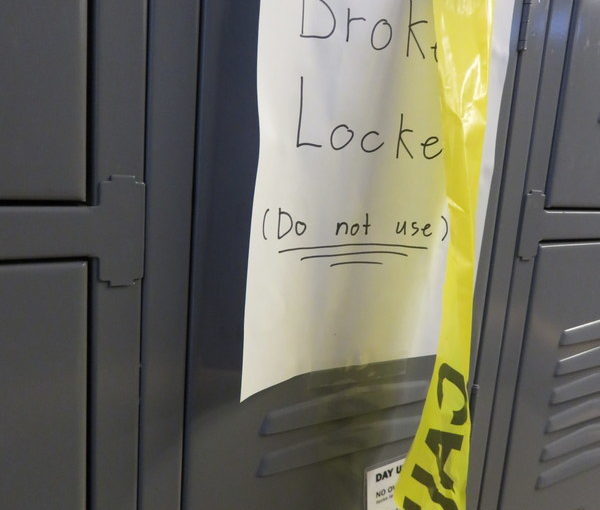 I last wrote about this broken locker in April and you can see that the sign has been upgraded and caution tape has been added.

Will the locker ever be fixed? It remains to be seen.