I started in July with a goal to write every day.  After the first three days, I started writing word counts. 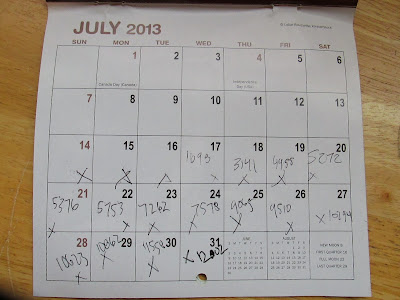 I kept it up in August,  minus the four days I took off for Cindy’s wedding.  On the 15th I realized my plunge-in-and-write style wasn’t working and did some character development.  Then work started and I had no time to write. 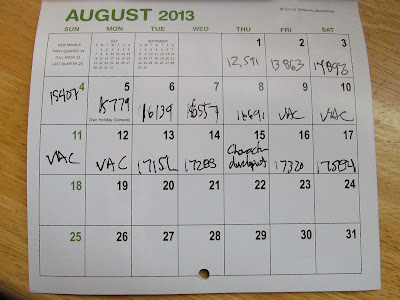 I took a writing class in October, and resolved to return to outlining, as that had worked well in the past for me.  My goal was 500 words per day.  I was very good at meeting this goal. 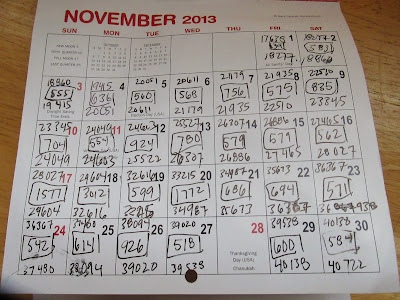 Except for a few days, I kept it up in December, too. 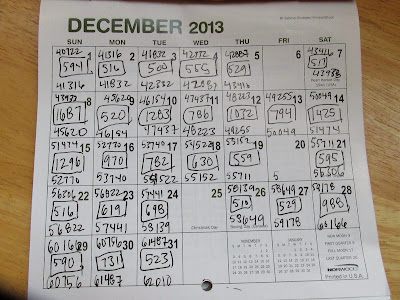 Onward to January.  Will I finish my first draft by 1/31/14?  Stay tuned.
I feel like I haven’t been taking very many pictures of late.  Although I’ve written over 475 posts for this blog alone this year, so perhaps a short break is in order.  But here’s what I’ve been up to, aside from reading, writing, watching movies and blogging.

I didn’t realize I had backer rewards coming, but here they are. 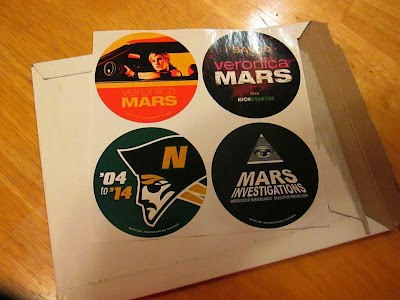 I made some bread.  It’s from Laurel’s Kitchen Break Book, which is the best book to pick up if you are thinking of taking up whole-grain bread baking in the new year.  This is the milk bread recipe and made two very nice loves.  The book itself teachers you step-by-step what to do to create excellent all-whole-wheat flour bread.  Most “whole wheat” recipes use a bit of whole wheat and a goodly amount of All-Purpose Flour. 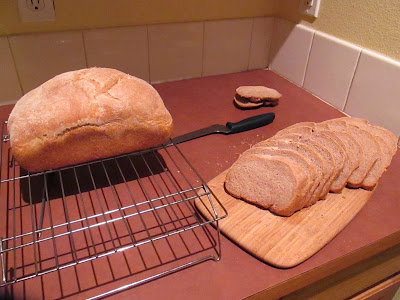 Bread making is a good skill to have if you want to save money and control your ingredients.  It’s also kind of magical.  This started as two cups of milk, a quarter cup of honey, some yeast, flour and salt.  A bit of mixing (with a mixer) and a few hours of rising and deflating and shaping and there is delicious bread waiting for me to eat.

Two tips should you embark on the bread journey:
1) Buy some vital wheat gluten (Bob’s Red Mill carries this product) and add 1 tablespoon per cup of flour.  It makes all the difference.
2) If you don’t have a warm place for rising (our house is mostly pretty cold) turn the oven to 170 and when it comes to temperature, set the timer for 10 minutes.  Then shut off the oven.  The heating turns the oven from a cold cave to a warm environment and if you turn on the light to the oven the temperature will be maintained. 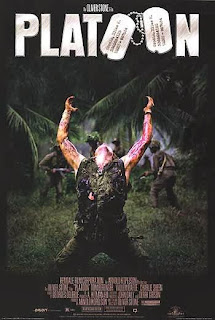 This movie was released just as I was starting to pay attention to what was going on in the world, so I remember the buzz, but there was no way I was going to be allowed to watch it due to violence and my parents’ ambivalence about the Vietnam War.*  Fast forward twenty-seven years and I can now say I understand what all the fuss was about.  I realized I’m coming late to the party and all y’all have probably seen it, but this had everything a great picture should have:  acting, setting, plot, a warts-and-all view of the war itself, as well as a smattering of war porn.**

Thanks to Jan and her Best Picture Movie Project.  Without her watching this, I never would have motivated.

*For a long time, I thought my dad was too old to go, but when Bill Clinton ran for president, I realized my dad joined the National Guard to avoid the draft.  This was something that was not really loudly proclaimed, especially since so many people made fun of Clinton for what was essentially begging to be in the National Guard.  Though now that we’ve had a president who joined the National Guard and didn’t even bother to show up, I can proudly say that my father actually did his National Service to get out of going to a crappy war, unlike a certain member of the Bush family.
**Because who wouldn’t want to die in such a dramatic movie fashion as Willem Dafoe? 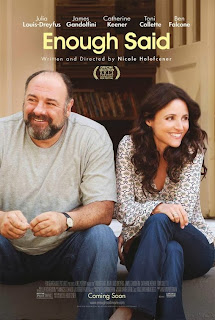 I wasn’t really ready to be uncomfortable for as long as I was during this movie, so that was a surprise.  However, I loved the romance and the chemistry between Louis-Dreyfus and Gandolfini and also Toni Collette* was there too, which made for some great acting.  There was a nice parallel story of sending your child to college, so overall, this was a very good film.

*Speaking in her real accent. 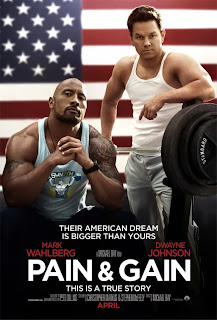 I’ve discovered Filmspotting, a podcast where they have long (long, long) conversations about movies and I find this podcast enjoyable.  Recently, there was controversy when one host picked this film to be in their top five while the other host was incredulous that it was liked at all.  Having now watched the film, I can say it was NOT an enjoyable example of the dumb criminal film* as what was amusing at the beginning turned quickly into the movie equivalent of the criminal’s “stupid” repeatedly banging me on the head with a chair.**

Cost:  $2.00 from Videorama
Where watched: at home with Matt.

*Good “dumb criminals” movies: Fargo, To Die For.
**Matt rather enjoyed it, though.

I really would like one, compact thing, with witch to access all of my music.  Instead I have a menagerie.

Here’s the stereo, which plays the radio, CDs, cassette tapes and also records, if I hooked up the record player. 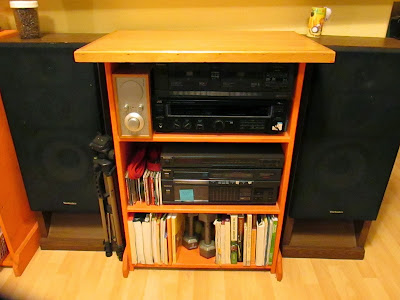 Because the stereo doesn’t really get good radio reception, I also bought this radio which I love! It’s small (notice it tucked away next to the stereo in the above picture) and the knob gives a satisfying “click” when I turn it on.  The reception is superior, which is great because I listen to the radio a lot. 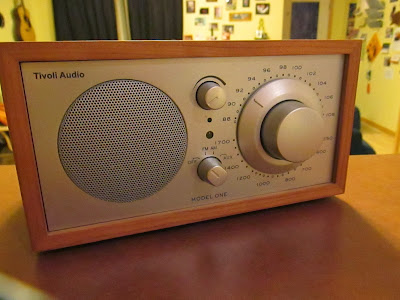 Unless you factor in podcasts.  With the new phone, I found an app that gives me podcasts I love.  Because I don’t like to walk around the house with ear buds in my ears, I bought this Bluetooth speaker.  It stores nicely in a drawer. 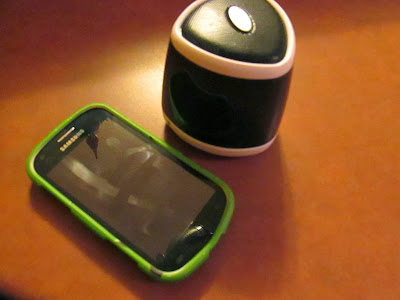 And then, if I want to listen to any non-CD, non-cassette music, I have the iPod, which is old.  It doesn’t even have all of my music because it doesn’t all fit (the rest is stored on my computer.)  I could listen to the podcasts via iTunes on the iPod, but I find iTunes incredibly unfriendly (and I know I’m in the minority here, but iTunes just doesn’t work the way my mind works) so I don’t get the podcasts through iTunes. 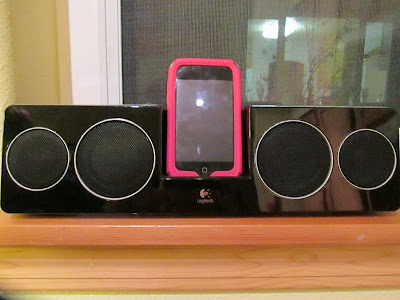 Someday I would like to have a compact stereo system with speakers that can play in different areas of the house, and my music/podcasts on one device.  But right now?  I straddle many worlds. 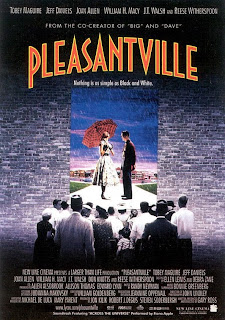 I’m a sucker for movies about awakenings and when they involve books or sex (two favorite things) I’m even more of a sucker.  So I think this movie is great, and very clever in its message.  It’s also perfectly cast and one of those moments in movie history where the technology combined with the story to elevate the movie beyond what it would have been otherwise.

Cost:  free from library
Where watched:  at home.  Knitting. 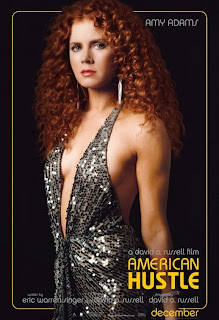 Overall, I found this movie to be a little on the long side, it could have been tightened up a bit here and there.  But also overall, I greatly enjoyed every performance, the hair, and the clothing of this picture.  Amy Adams and Jennifer Lawrence are incredible to watch.

Cost:  $5.00
Where watched:  Regal City Center Stadium 12.  Where, for the first time in a long time, there were a goodly number of people there.  We actually got stuck in the parking garage because so many cars were exiting at the same time.  That never happens.  We played the Advanced Level Preview Game* to pass the time.

*The Preview Game, brought to you by Sara of Pike Schemes.
Everyone in your movie-going party makes a guess as to how many previews there will be before the movie.  In our rules, you have to have a green screen (the MPAA rating thingie) before the preview for it to count.  Sometimes theaters sneak in special sneak previews of films, but these do not count.  The person who guesses correctly, or is the closest, wins.  Bonus for dramatic flourishes of the hands while counting previews.

The Advanced Preview Game, brought to you by me.
After the movie is over and you have discussed what you like and dislike about the film, try to name (or describe, if you can’t remember the name) every movie featured in the previews.  This is a surprisingly hard game.  If you can name them all, you win.  Winning in this case is usually a team effort, as my mind goes totally blank.  I usually end up asking Matt questions to elicit some of the movies.  Questions might be: “Was there a movie with a lot of shooting?  Was there a talky-talky feature?  Was there something Sci-Fi?  Anything with kids?  Did one of the movies prominently feature women? 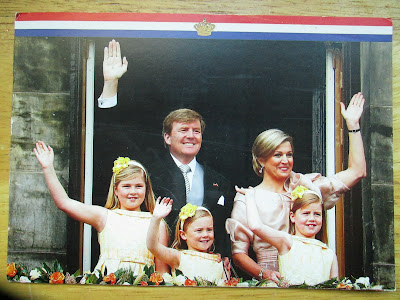 Hans writes from Utrecht that “I love our Royal House.”  He also told me that they got a new king and queen this year, which I knew because of an earlier postcard from the Netherlands and because I read it in the paper.  I would be excited about a new king (or queen) too! 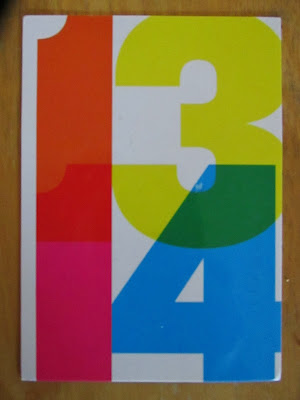 Preston writes from Canyon, which is apparently a small city in the Texas Panhandle.  He tells me that Canyon is where West Texas A&M University is.   I’m also interested in Preston’s card because he sent it with a 33-cent stamp.  It occurs to me that it has been a few years since 33-cents paid for a first-class letter.  I remember the stamps he sent, though.  It was the series of early US flags.

It’s been a dry month for Postcrossing postcards.  I’m glad these two came in the mail. 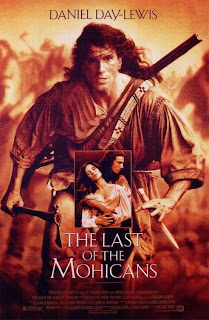 I avoided this movie when everyone was swooning over it, and I’m not sure why.*  I was set to find this dull or not-well-aged or something, but the movie won me over with it’s story and not just because Daniel Day-Lewis is kind of a hunka-hunka-burnin’-love.**  I liked that it was a Michael Mann film which means manly men doing manly things, but Hawkeye was all gooney over the girl, which is a rare sight in a manly men film.***

Cost:  Free from library
Where watched:  at home. (Toes are now confetti pink.)

*As a teenager, this happened a fair amount with movies.  If too many people liked something, I just never saw it.  This is why I cannot count either Turner and Hooch and Top Gun in my movies-watched-pantheon.
**I feel like I mostly see Mr. Day-Lewis in roles where he’s all grizzly or icky for some reason.  Not all tall and tanned and well turned out as in this film.
***However, we must discuss an interesting phenomenon.  I’m calling it Decade Hair Creep, but it needs a better name.  In DHC, some or all of the main characters’ hair take on the qualities of the current day, despite relative historical accuracy of the rest of the film.  In this case, I’m thinking of how quickly the two female leads lost their coifs and walked around for the rest of the movie with perfect early-90s tousled locks.  At one point, one of them has even fashioned a very 1990’s braid, on the side front.  She had time to do that braiding, but didn’t feel compelled to pull her hair back completely?  Hmmm.  See also:  all the orphans in the 1982 version of Annie.  Also, the mother in A Christmas Story. 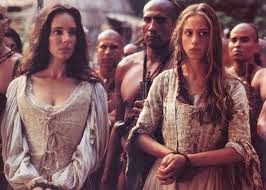