I’m walking out the door for a day of playing Settlers of Catan (I know you are jealous) and I see that my neighbor has people doing work on his parking strip.  They’ve pulled out all the bamboo and have hacked off several branches from the Flowering Plum.  I figure they are just doing a rough cut for a rather aggressive pruning job and go on my way. 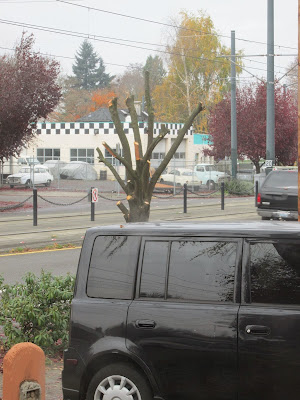 But when I look out the window the next morning, I find that the work appears to be complete, for there is mulch spread all over the parking strip, yet the tree has been hacked to bits, and still left standing.

What the hell is going on?  I hate flowering plums.  We have one in front of our house too. They were planted along the street when the Max line went in and you can see two on the other side of the street in this picture.   I think they are ugly trees, save for the four days in the spring when they are blooming.  I’ve wanted to replace ours with something more pleasing to the eye since the day we moved in. But I haven’t because it would ruin the uniformity.

However, I would never just chop it back like this and leave it.  It’s ugly.  Either take the tree all the way out, or trim it properly.

2 thoughts on “What’s the plan for the tree?”