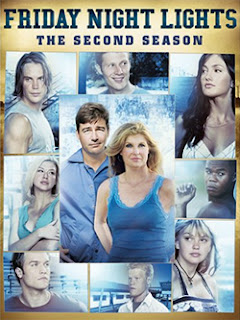 O! Season two, you abruptly ended when Tim Riggins was in full-on wooing mode.  I found this season to be much more DRAMATIC than the first one, which I did not enjoy so much.  However, they laid such a firm foundation in season one, I just kept coming back for drama-fest season two.

Cost:  free from library (though I think I had to pay a few days worth of fines)
Where watched:  at home with Matt.