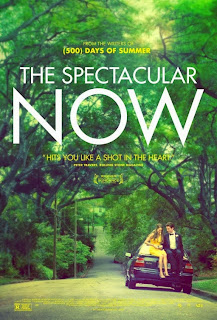 What was spectacular about the Spectacular Now was the acting and the actors.  Both sank into their roles in a way that I don’t often see in a movie with teenagers and for that alone this movie is worth seeing.*  I had problems with the ending–it felt revised and tacked on in an unsatisfying way–and I didn’t feel a tremendous depth, a problem I solved by reading the novel, which was quite good.**

*There were a lot of interesting non-standard teen movie things to like about this movie.
**In novel/book comparisons, I observed that it is very difficult to bring to the movie screen a book character like Aimee, the female protagonist/lead.  I think the problem is that everything is shiny in the movies, making it difficult to project the inherent awkwardness/uncool persona that easily comes across on the page. Nerds live in books, easily.  They don’t really exist well on the silver screen.