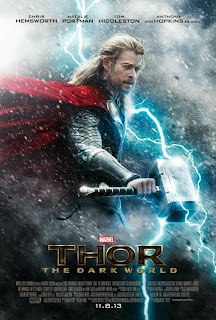 Unlike the first movie (which I found kind of boring the first time through and strangely profoundly moving the second viewing) this movie was very well-balanced, giving good time to the earth people, the Asgardians, Thor’s friends, Thor’s romance, and even a bit of gratuitous washing up involving a naked torso.  But best of all, (well, second best, because Chris Hemsworth has got something going on) was Loki, who is perhaps my favorite Marvel villain, mostly because he’s just so fun.  I thought the fight scene at the end was full of creative action-movie-fight scene-type-things and hopefully you will stay for the bit during the credits AND the bit at the bitter end of the credits.