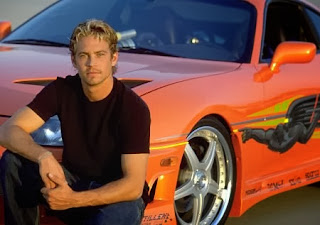 Paul Walker, The Fast and the Furious.
photo from IMDB
It was spring of 2003 and I was in the incredibly boring “observation” phase of my teacher education career.  While other of my classmates were making deeper connections with the teachers they were observing and even getting to teach something now and then, my mentor teacher didn’t really seem to want me around, and encouraged me to observe other teachers on the staff.  They didn’t want me around either, so I floated from period to period, class to class like the perpetual new girl who didn’t fit in.  In hindsight, I can’t believe I was paying PSU for this experience.
So it was that I was sitting in the classroom of a rather absent-minded teacher nearing retirement. It was during the passing period so the kids were doing things kids do before they get to class early:  check their phones, wander around and talking to people, engaging in shenanigans.  The building itself was soul-killing.  It had been built in the 1970s and had no windows for energy efficiency.  Many classrooms were divided by folding walls, so that classes could come together and teachers could co-teach.  That practice had been abandoned, but the flimsy partitions still remained.  It just meant that you could hear what was going on in the other classes, if the teacher or class was too loud.  Sometimes I wonder if there are things more depressing in the US than educational policy through the years.  I mean, when you really think about it?
I had perched in an empty desk in the back of the room and was watching the students, which was the best part of the experience.  One girl had gone to Disneyland over Spring Break and had some pictures to show her friends.  A few of them looked over her shoulder.
“And I met Paul Walker,” she said, shyly.  And there she was in the photo, standing with a smiling blue-eyed blond.
“He was just there?  At Disneyland?” one of her friends asked her.
“Yes.” The girl smiled, “And I asked him if I could take his picture and he said yes.”
“That’s amazing.”
Who was Paul Walker? I wondered.
Another girl, not part of the friend group, perked up.  “What was that?” she asked, bustling over.  She was one of those big girls: tall, big boned, big hair, big voice, big personality.  “Oh my god, that’s PAUL WALKER!” she exclaimed.  “HOW DID YOU GET THIS PICTURE OF PAUL WALKER!?!”  She squinted at the photo, not listening for the answer.  “IT’S REALLY PAUL WALKER!  SHE HAS A PICTURE OF PAUL WALKER!  I CAN’T BELIVE THIS IS YOU WITH PAUL WALKER!”  Her voice took on that pitch and decibel level that only teenage girls and annoying radio contest winners can reach.
The classroom teacher looked on her shrieking in a nonplussed manner.  The bell hadn’t rung yet, so no need to reign her in yet.  But her shrieking didn’t go unnoticed by the others in the class. “Who the hell is Paul Walker” I heard muttered from different areas.  The partition was even pried open and a much younger, less absent minded teacher poked her head in.
“Everything okay in here?” she asked, scanning the room.
“SHE HAS A PICTURE OF PAUL WALKER!” the girl shrieked to the teacher, who was not at all interested.
“Maybe you could keep it down.” the teacher suggested, and closed the partition as the bell rang.
The picture was returned, the girl settled down and I made a mental note to check who Paul Walker was.
It turned out I knew who he was.  He was the guy in the Fast and the Furious.  The same sort of blonde blue-eyed leading man Hollywood pops out by the hundreds and throws against the wall of audience enjoyment to see who sticks.  He’s the kind of guy I think of as a working man actor.  Good enough (or good looking enough) to get major parts in minor films, but never considered a serious actor, either because he didn’t have the acting chops or because the path to serious acting is a difficult and treacherous one only achieved by a few.  And why not sit back and rake in the money making movies that the masses love?
And now he’s gone.
I’ve never not paired Paul Walker’s name with that girl shrieking in that classroom long ago.  She’s probably moved on, I’m guessing Paul Walker was a passing adolescent infatuation, but I also can picture her hearing the news early on a Sunday morning and shrieking “PAUL WALKER IS DEAD!” loud enough to bring her husband and children from their beds, blearly-eyed and wondering,  “Who the hell is Paul Walker?”
May he rest in peace, and may his friends and family have an easy transition to a world without him.