It’s been coooooooollllllllldddddd in Portland (getting all the way down to the high 20s)* so our frosts have been fierce. 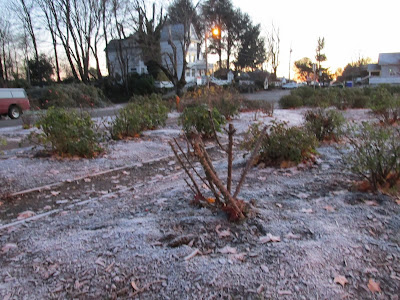 Whenever there is a heavy frost I think of the Dave Barry column about the worst songs ever written, which thanks to the internet, is available here to read for yourself.  However, for those of you who are not going to click, I’ll just excerpt the Wildfire part:
Many readers are still very hostile toward the song “Wildfire,” in which singer Michael Murphy wails for what seems like 97 minutes about a lost pony. (As one voter put it: “Break a leg, Wildfire.”) Voter Steele Hinton particularly criticized the verse wherein there came a killing frost, which causes Wildfire to get lost. As Hinton points out: … ‘killing’ in ‘killing frost’ refers to your flowers and your garden vegetables, and when one is forecast you should cover your tomatoes … Nobody ever got lost in a killing frost who wouldn’t get lost in July as well.”

*And yes, people who live in places that actually experience cold, I KNOW that isn’t very cold.  But I’ve acclimated.

2 thoughts on “Is this the kind of killing frost in which Wildfire was lost?”