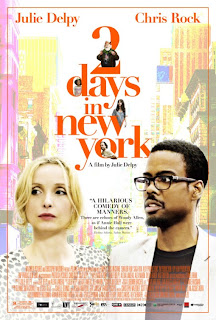 Aside from Julie Delpy being the bomb, I wanted to see this because the trailer led me to believe that Chris Rock was the straight man and that was a rather intriguing concept to me.  And he was the straight man, standing up mightily to the comic turns of Delpy’s family.  I found this amusing, though not laugh-out-loud; and I also discovered by watching the commentaries that this is a follow up to an earlier film which I’ve now also placed on reserve at the library.