Have you heard about World Book Night?  Me neither. It’s a night where publishers publish books (list is here) so people can walk around and give them away.  How fun is that?  Powell’s had a kickoff event where Cheryl Strayed, Matthew Dickman, Amanda Coplin, Paul Collins, and Chelsea Cain all talked about a book that had influenced them.
Here’s Cheryl Strayed introducing the night. 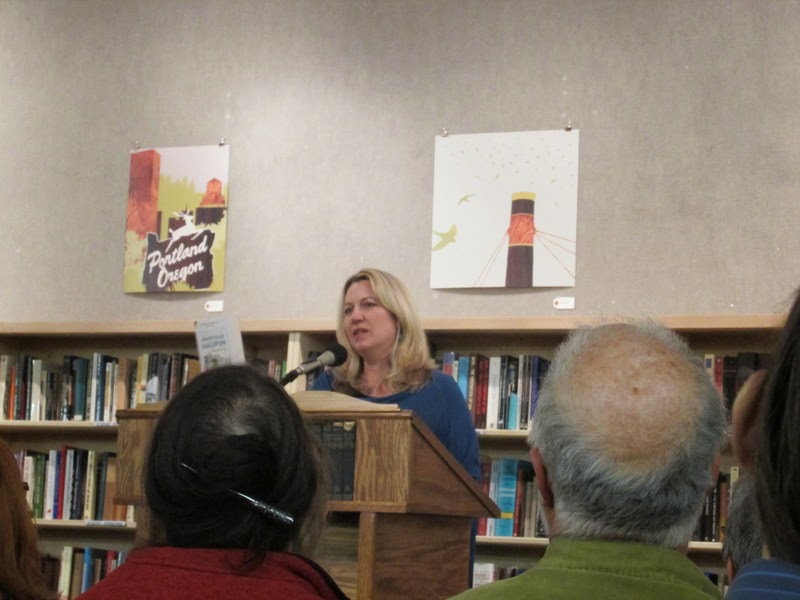 Matthew Dickman told us of his favorite book.  In the manner of all of the speakers, he managed to call out several before he got to the one he was really talking about.  He mentioned Island of the Blue Dolphins, (and I knew right then we were the same age, because that was a big one for me too) then talked about the poems they read in school, which were dense and heady and hard to comprehend.  So it was a watershed moment when he found All My Pretty Ones by Anne Sexton and he could read and understand the poems.  That lead him to Charles Burkowski and then his teacher gave him a copy of Allen Ginsberg’s Howl.  Along with the book came a postcard with Allan Ginsberg standing on a corner in New York with all his poet friends, and Dickman said that where he grew up, guys standing on the corner was a bad thing, and bad things came from guys standing on the corner.  To see a bunch of poets hanging about in such a way and creating art instead of trouble, was something to remember.  And so he read us an excerpt from Howl.
Chelsea Cain bought up her copy of Synonyms and Antonyms. Her mother had given it to her and inscribed a note in the flyleaf.  So we know that it was bought after a viewing of My Friend Flicka.  Cain pointed out that her mother made a habit of inscribing books, which means that now she can never get rid of said books.  Also that this was the first tool she was given as a writer and she used to page through it.  Now she uses a website to find her synonyms, which is a different thing than flipping through a book.  She then read to us from The Mystery of the Glowing Eye, one of the many Nancy Drew Books she read over and over again from first to fifth grade.
Paul Collins brought his copy of Three Men in a Boat, by Jerome K. Jerome.  Despite sharing a last name, too much time has passed between this event and this write-up of the event to remember why he chose that book.
Amanda brought Mouchette by George Bernanos.  She especially liked the version of the New York Review of Books Classics.
Cheryl Strayd brought her copy of Black Beauty that her mother read to her when she was three. (!)  Strayd said that she hasn’t read this book to her children yet, even though they are something like eight and ten years old.  The horrible things that happen to the horse are too much.  However, the book was incredibly influential in beginning the Society to Prevent Cruelty to Animals and the writing is beautiful.  Plus, her mother was a horsewoman and always had a horse.
This was an excellent presentation and introduction to World Book Night.  Thanks Powell’s.