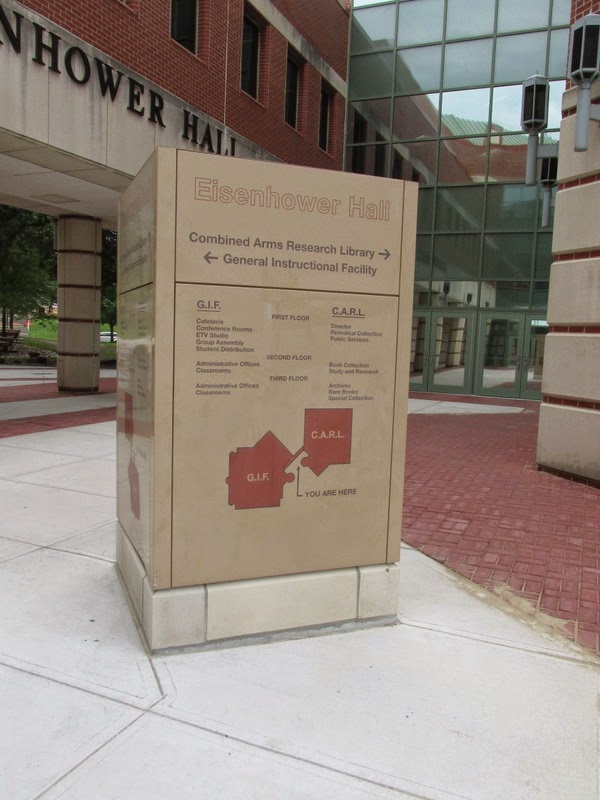 On any vacation, I enjoy visiting libraries and this was no different.  Heather took me to CARL the Combined Arms Research Library, which was my first army library experience.
They had a good YA section.  Here’s where John Green’s books would be if there were any on the shelves.   Also note that Go Ask Alice (by Anonymous) is mis-shelved. 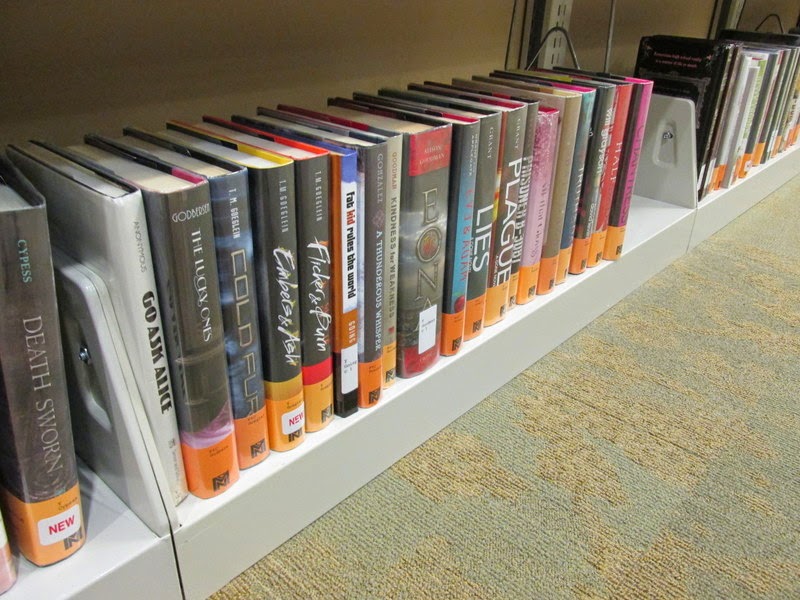 A nice display encouraging one to not join the book burners. 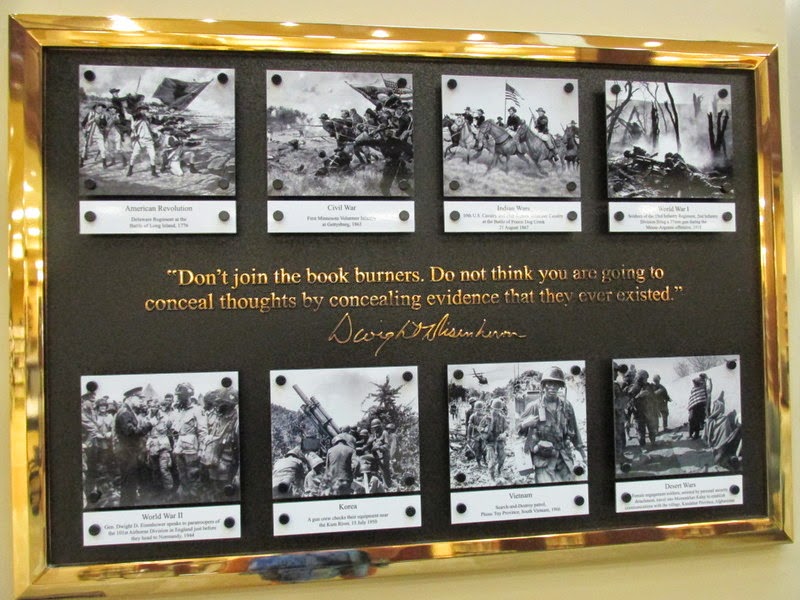 There was a good collection of DVDs to choose from.  Also, because a lot of soldiers come to Ft. Leavenworth to go to school, there was also a section of the library that looks just like university bookstores look, although the books were available to lend, not buy. 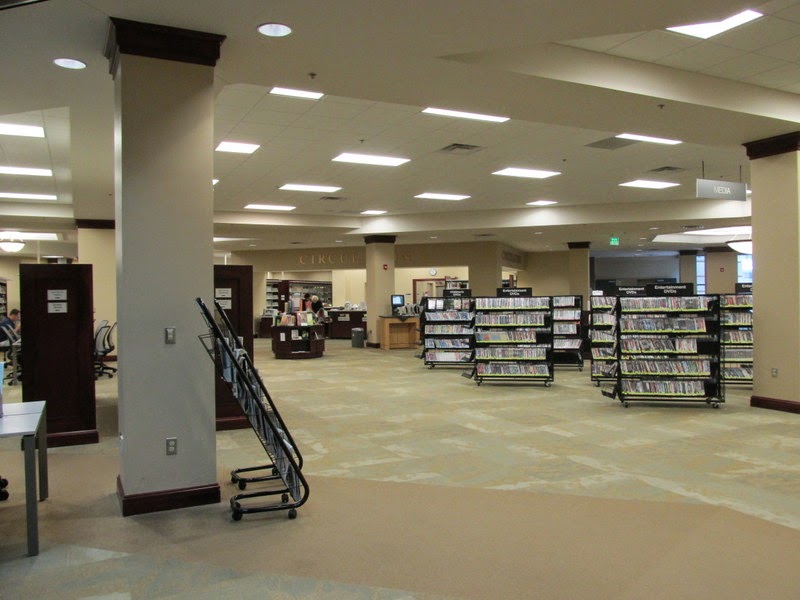 They also had a very nice children’s section which was wisely walled off from the regular library. 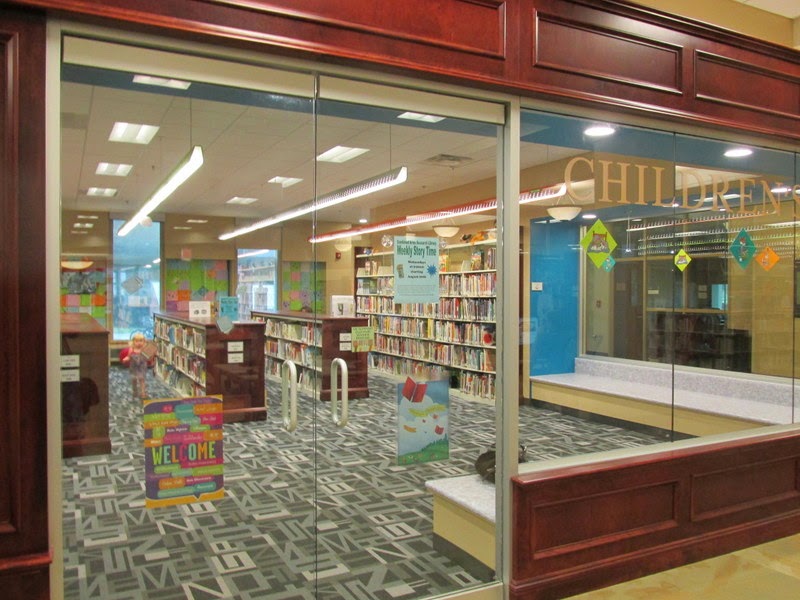 Outside of the library we took a walk.  Most bikes weren’t locked up and many riders just left their helmets dangling. Very different from Portland. 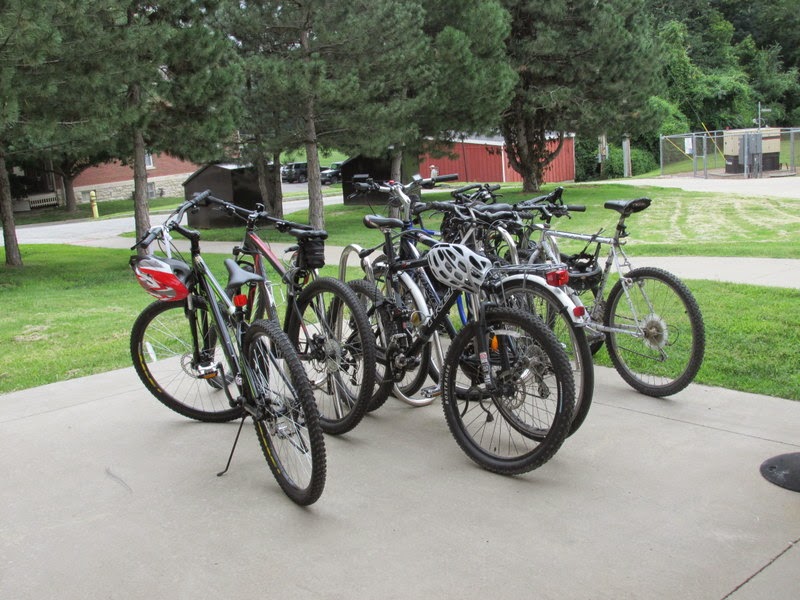 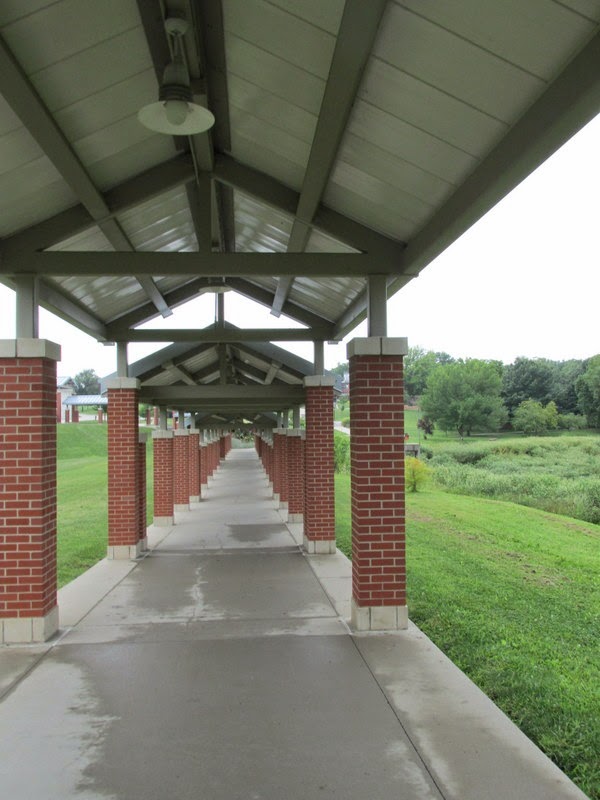 Look what we found! 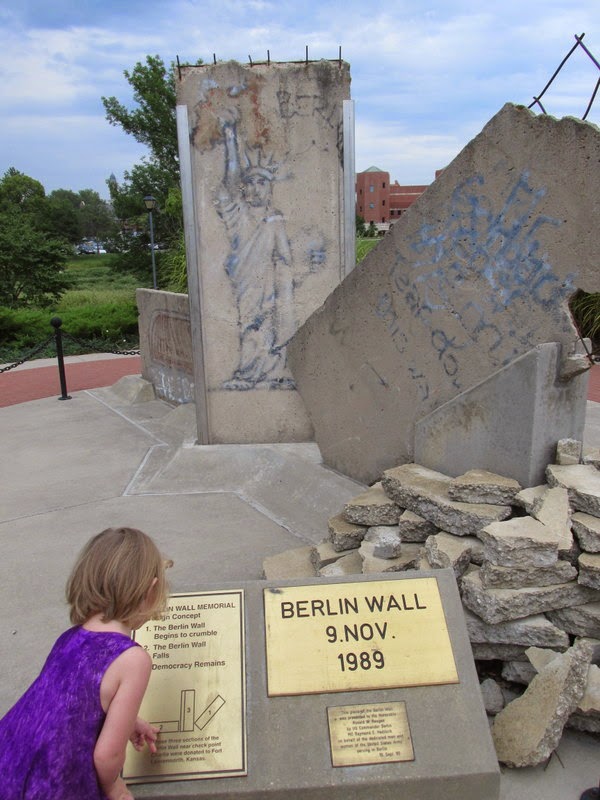 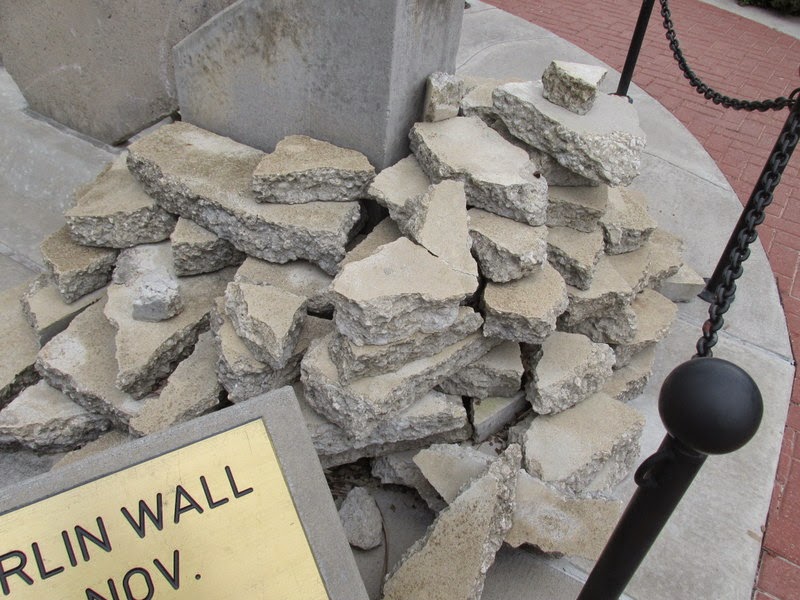 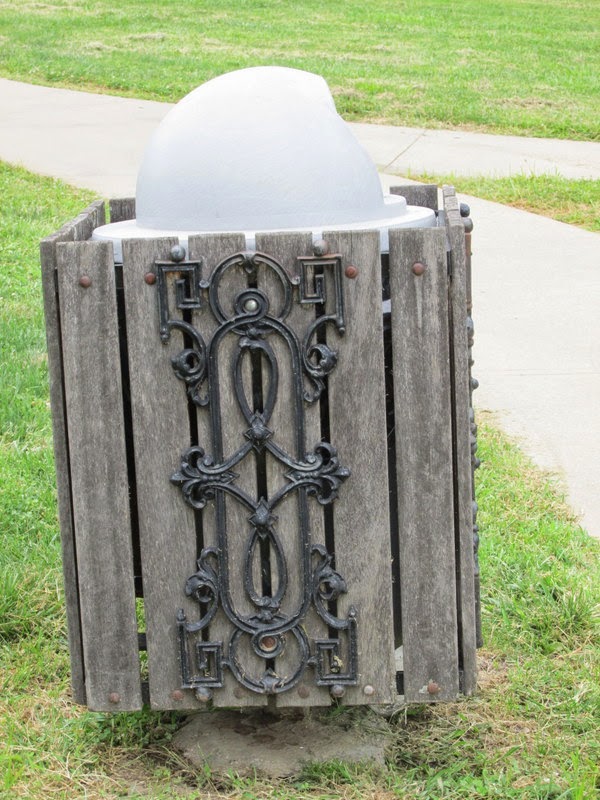 Here is the Buffalo Soldiers’ Monument. 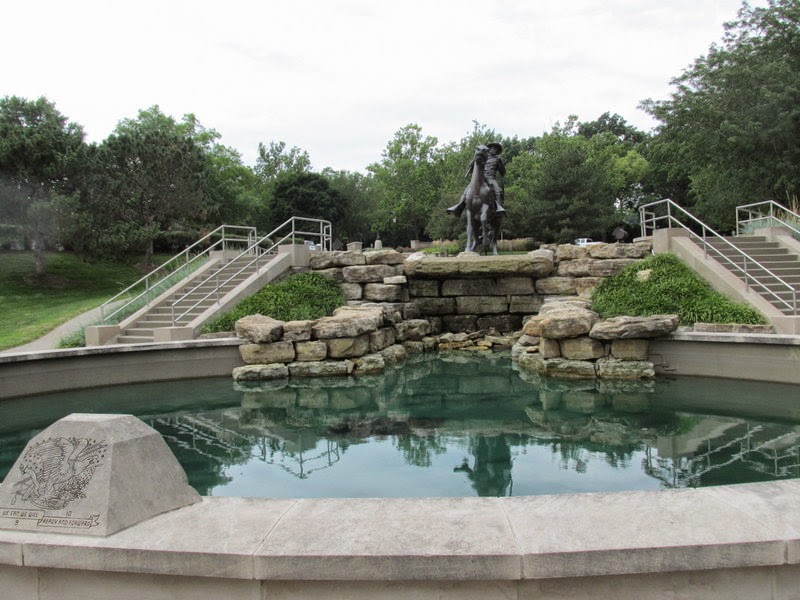 L & E look at the monument.  Right after I took this picture E walked under the bar and onto the rocks and I retrieved her. 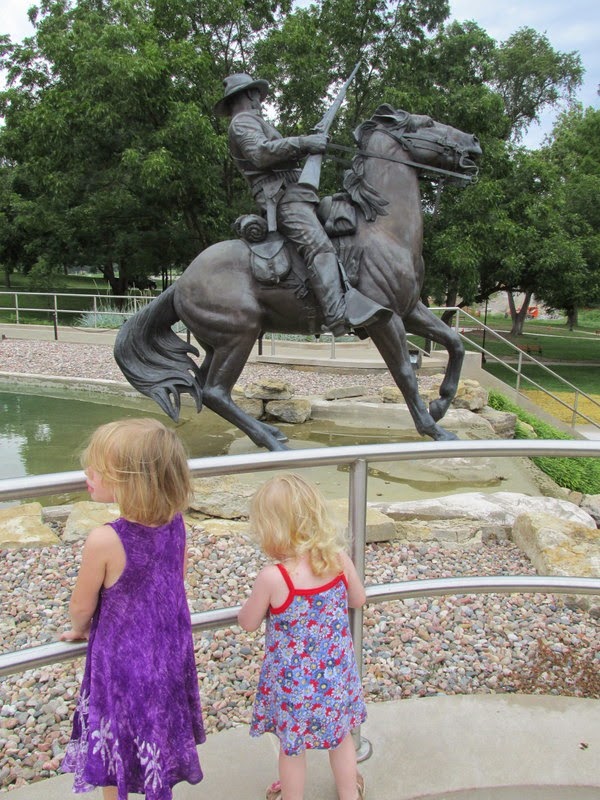 Info about the monument. 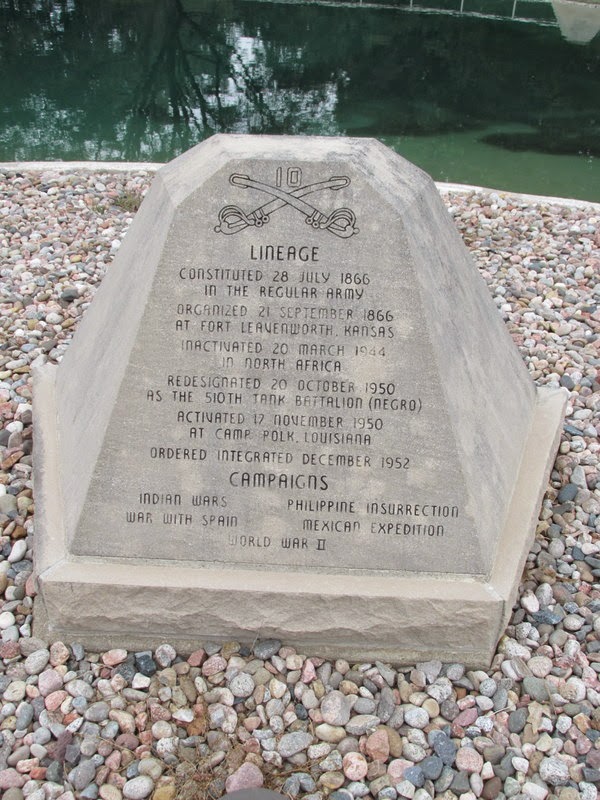 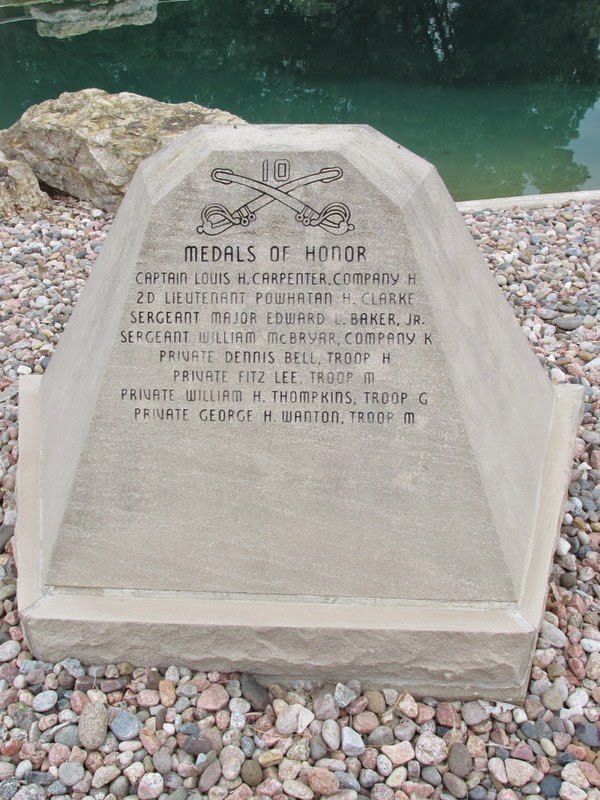 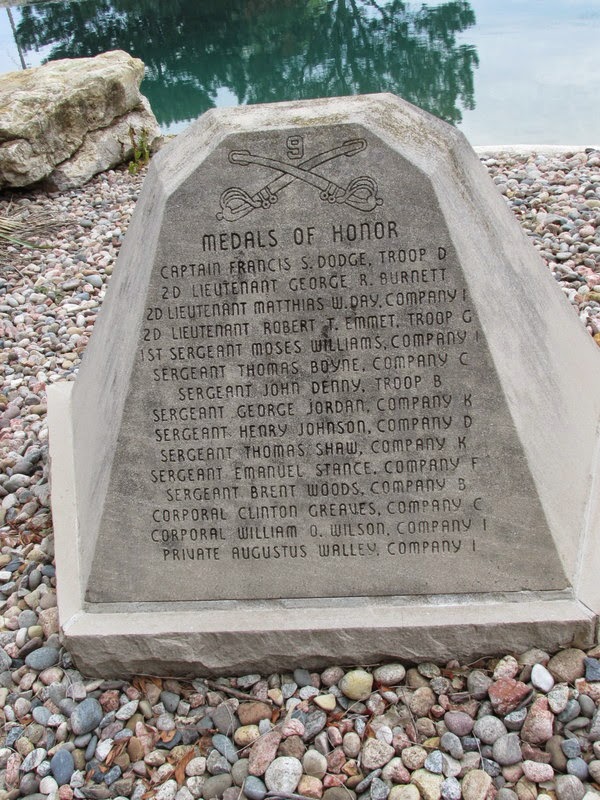 There is also a section that recognizes important African Americans in the army. 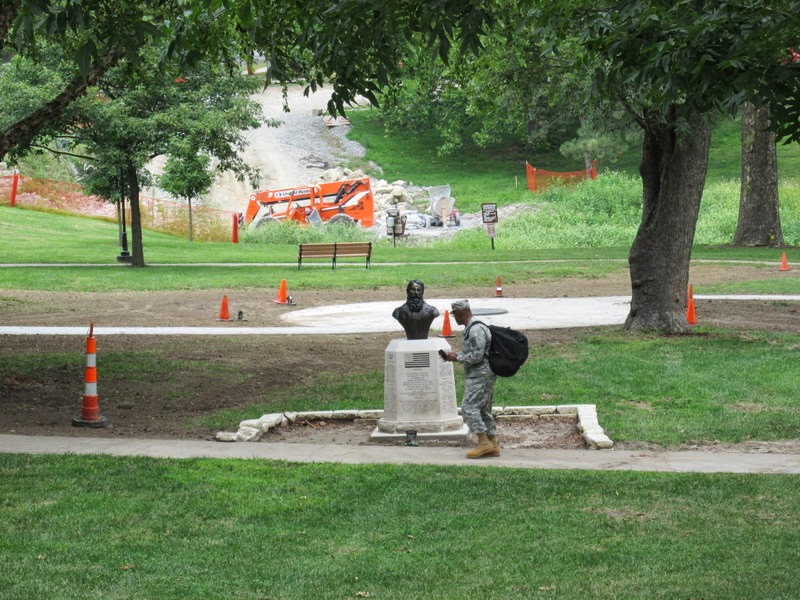 I read about the smoke jumpers last year for Librarian Book Group. 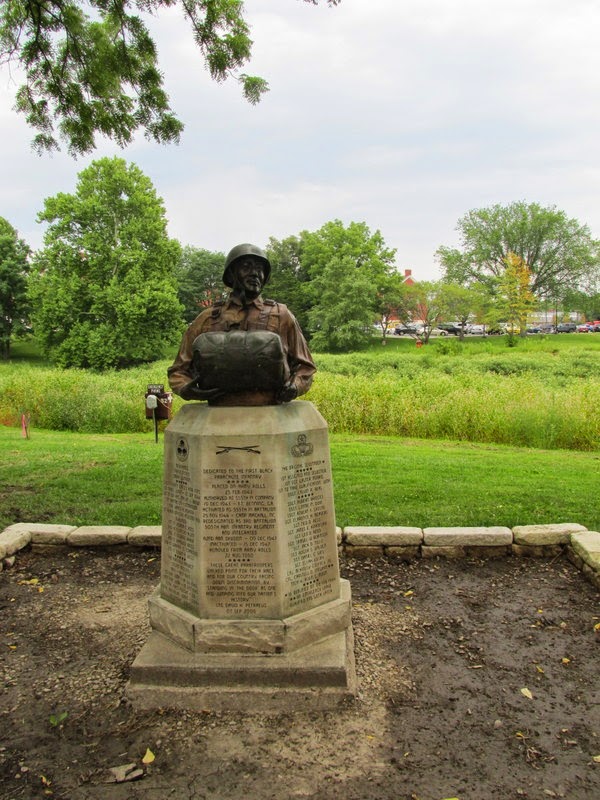 Here is General Roscoe Robinson Jr. who was the first African American Four Star General of the US Army. 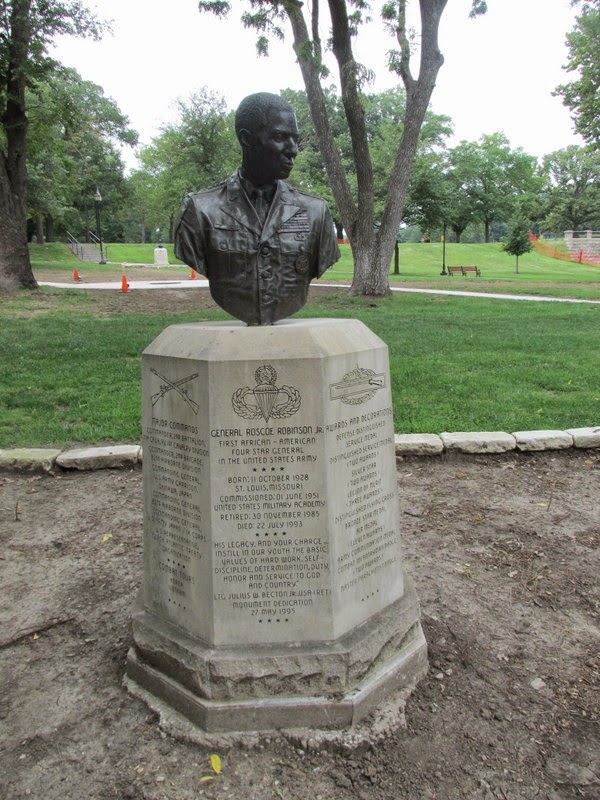 This guy advocated equal treatment for Blacks and Native Americans. 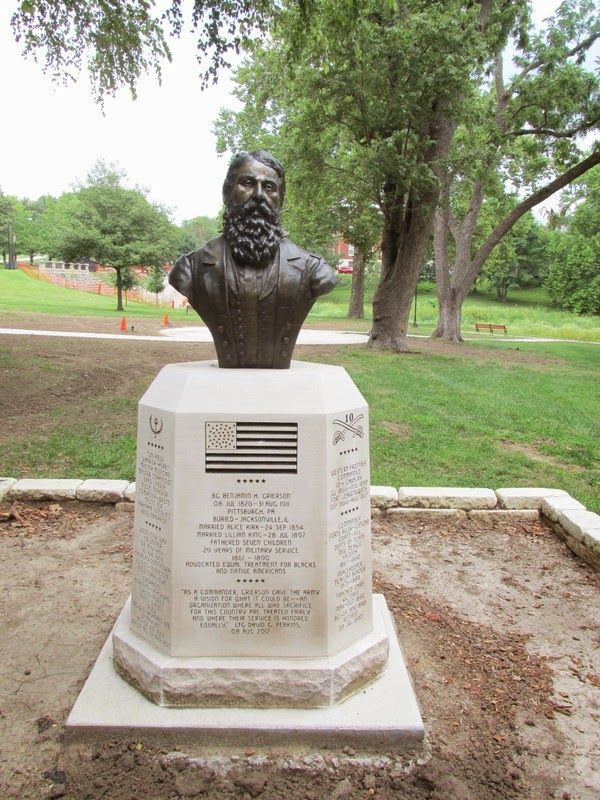 Here is where Colin Powell will be soon. 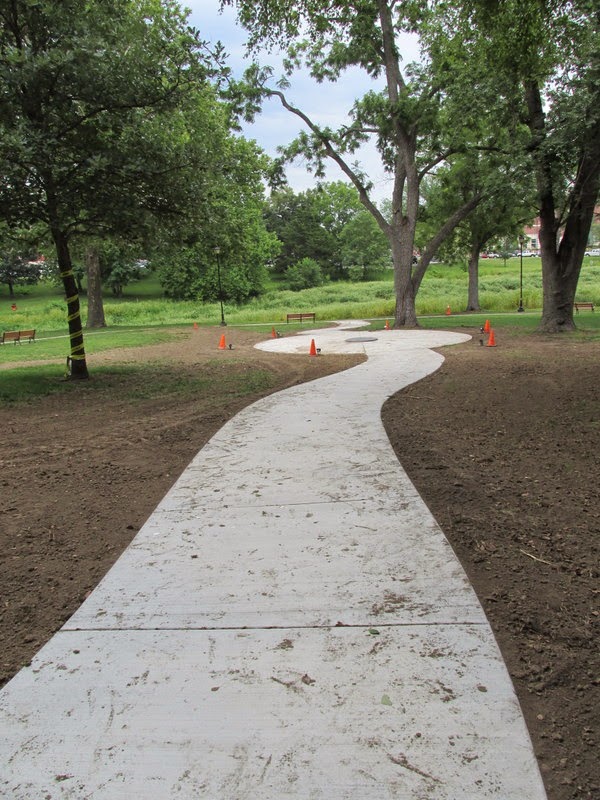 Henry Ossian Flipper was the fourth black to attend and the first black to graduate. That syntax comes from the monument, not from me.  He is our last stop on the Circle of Firsts.  (I found a brochure) 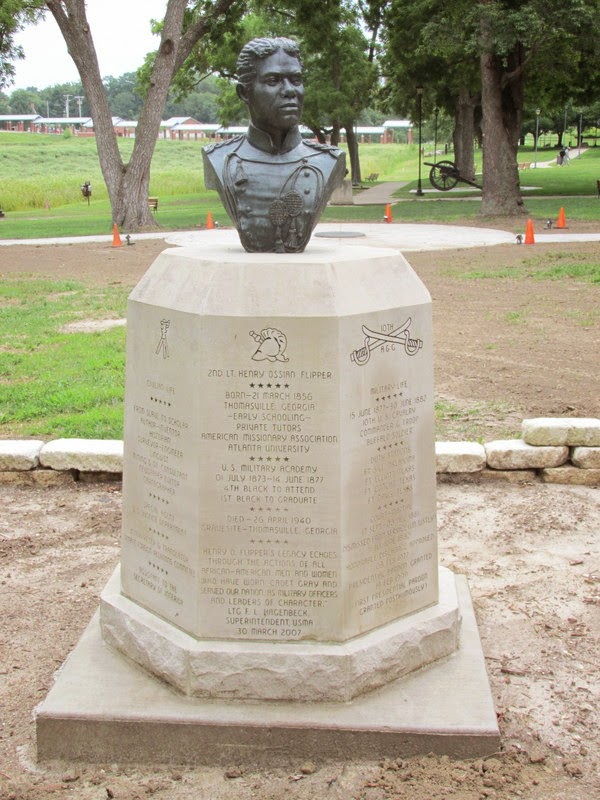 I wandered to the post office and then around for a bit . Nice ginkgo tree. 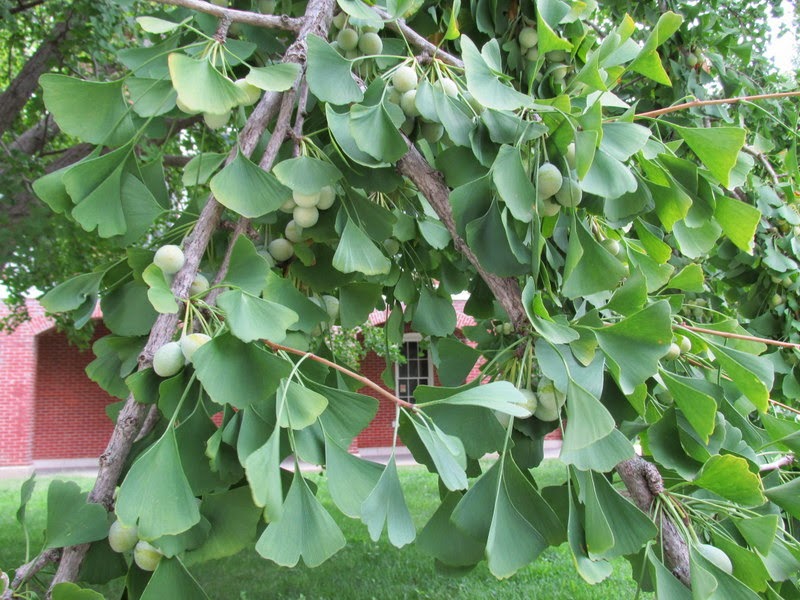 This was once known as the “Beehive.”  This is because this was housing for a period in the 50s and 60s for families who had five or more children.  It’s a huge building, which would easily take up a city block.  Apparently all the children running in and out all day made the building seem like a beehive. 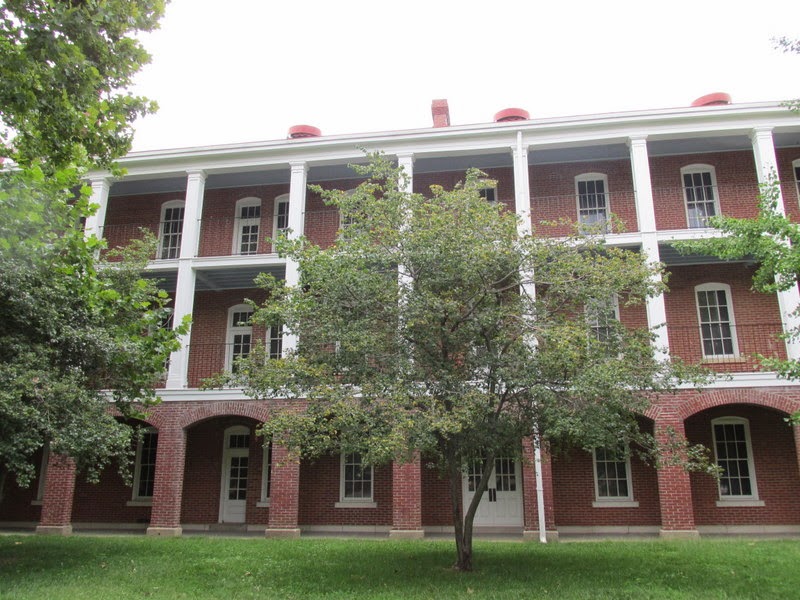 The house on the far left was where Eisenhower was posted when he lived here, long before he became a general. 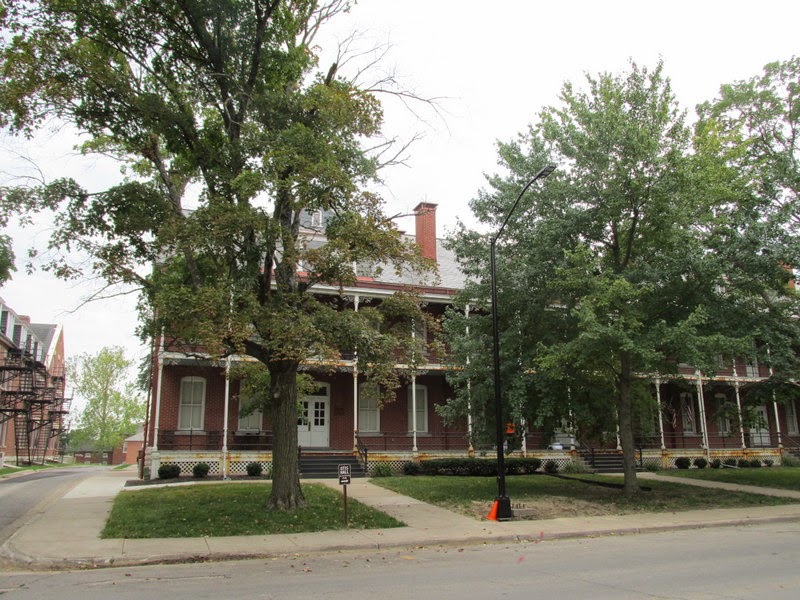 I liked this dog sitting in the doorway. This also shows how every house has a nameplate telling you who lives there. 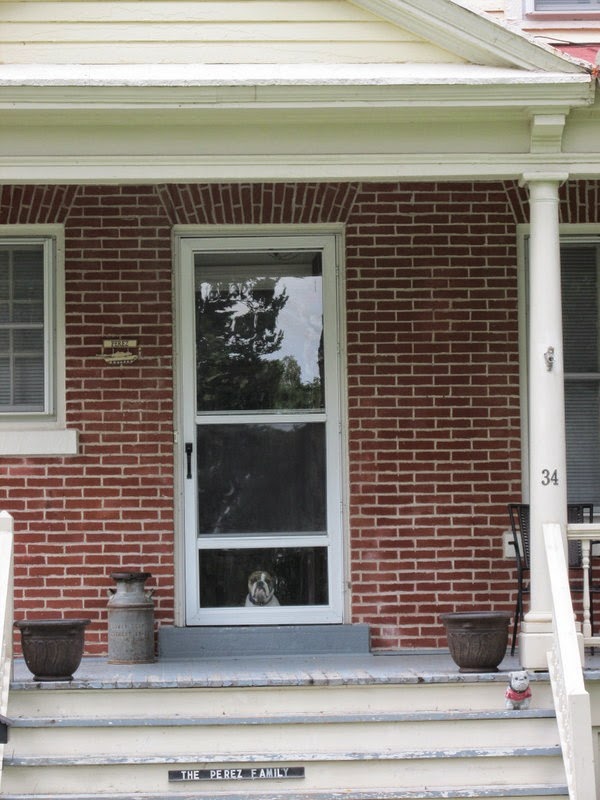 This is the Japanese house which has housed a succession of families from Japan since the 1960s. 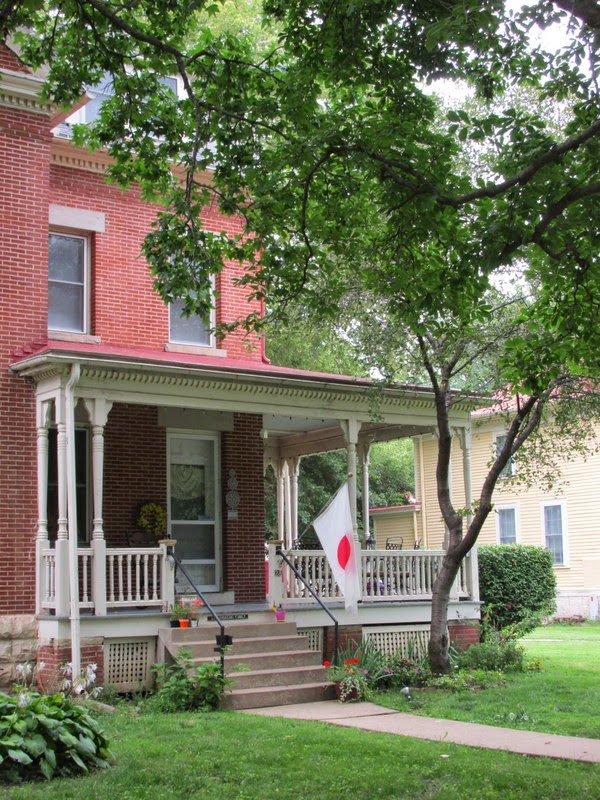 We also went to the PX, which is like the army department store.  My favorite part was the uniform shop, where all the little uniform doodads are purchased. 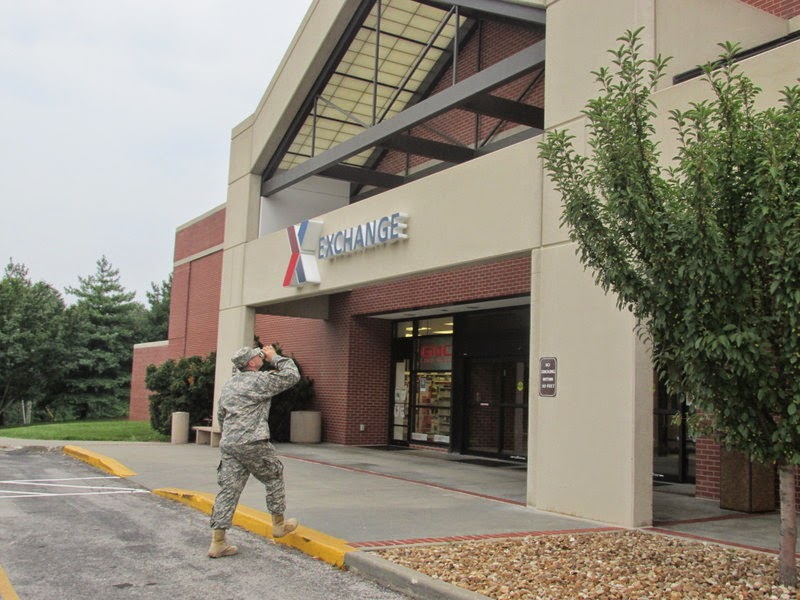 4 thoughts on “CARL, Buffalo Soldiers Monument, more of the Fort, the PX”