When the people who invented Kickstarter launched their project I’m sure they envisioned a happy future when random people all over the world would find, love and fund various projects, creating a new method for people to raise capital to launch them into a world where they were paid to produce things they had dreamed about.  I’m not sure they pictured the cult of Kickstarter projects that would form, nor, I’m guessing, did they plan for the level of excitement evidenced by the fans of Kickstarter projects.  I’m guessing they could not have dreamed up my boyfriend’s level of interest, but I’m guessing they are quite happy to have it.
This is because while I become fixated on rather beefy movie stars of possibly questionable acting talent, my boyfriend falls in love with Kickstarter projects.  And just as my peccadillo results in hours of consumption, thinking, research and discussion about said movie stars, my boyfriend feels a similar intensity of feelings towards projects he finds on Kickstarter.  This means I hear a lot about his various Kickstarter obsessions.  That’s one of the secrets no one tells you about adult life.  If you find a partner in life, you get to learn a lot about the things they are excited about. I’m sure my boyfriend never dreamed he would have this level of knowledge about Channing Tatum, just as I never dreamed I would be so familiar with the intricacies of the fundraising goals for the Order of the Stick, the Veronica Mars Movie project, and Habit RPG.
But good things can come from the boyfriend’s obsessions.  For instance, thanks to his contributing to the Order of the Stick campaign, I got to complete the special OOTS Coloring Book.  And thanks to his haranguing about the Veronica Mars Project, I too became a backer and will eventually get some cool stickers, as well as the satisfaction that I gave ten dollars to fund a movie.  As you can see, just as the boyfriend’s consumption of movies with beefy movie stars has increased by knowing me, so do I get involved in his Kickstarter projects.
Let’s talk about his most recent Kickstarter interest:  Habit RPG.  This is an online program that helps you build habits.  It’s based on roll playing games (RPG) like Dungeons and Dragons where your character moves through levels, gaining things (experience points, gold, new stuff) as you go.  I have been using Habit for a few months now, thanks to the fact that one of the features is that you can have a “party” of people also using HabitRPG and I’m the only other person the boyfriend knows who could be a potential user of HabitRPG. Note:  If you know me and are on Habit, you should join our “party.”  It would make the boyfriend very happy.
So I started using HabitRPG reluctantly, and only to get him to stop bugging me, but once I started using it, I found it fun and kept using it. Here’s how it works.  You start as a basic character, pick some habits and then start checking them off as you achieve them.  You can pick basic habits, which are things you want to do more (or less) of.  There are also dailies, habits you want to do on specific days of the week, and then one-time things which is sort of like a to-do list that never goes away.

Each time you check off one of your habits you get experience points, which help move you to the next level, and you get gold, which let you buy things.  Habits can have a positive or negative element, or both.  So for instance, if you want to track your money, you could set that up as both a positive (I did write down the money I spent today) or a negative (I did not write down what I spent today.) If you click on the positive, you gain XP and gold.  If you click on the negative, you lose health points.
As you move though the levels, you can buy more and different armor, which is fun and also helps you in some nerdy way I’m not really clear about.  You can also set your own rewards and spend your gold on them.
Habit also uses random reinforcement.  Once you hit a certain level, you will start to get random “drops” (the sudden appearance of something cool) of either potions or eggs.  You can then use a potion to “hatch” an egg which turns into a pet.  There are 90 pets, which live in your stable and can be displayed at any time.  There are also badges to be earned for completing 21 consecutive daily habits. 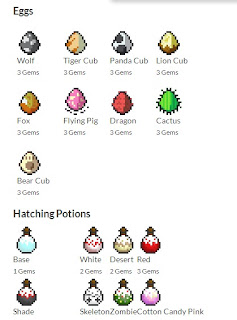 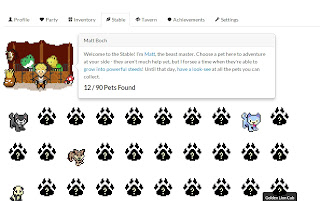 None of this matters in the real world, but it’s quite fun to have a virtual reward for the daily to-do list.  The site is still pretty new and fairly buggy.  For example, in clicking around the site while capturing images for this essay I got kicked off once and the load time overall was quite slow.  Eventually there will be a phone app, but in the meantime, you have to log in on your computer to check things off.  Sometimes your random drops include 12 shade potions, or you get more XP taken away than you should.  But overall, it mostly works and the positive reinforcement nature is quite fun.  After all, wouldn’t you like to look like the boyfriend and I currently do? 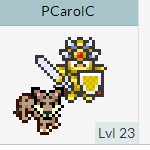 If so, join HabitRPG today.

2 thoughts on “Kickstarter and Habit RPG: How living with someone influences your habits.”