As you may recall, I’ve taken a break from writing essays so I can focus on writing 500 words per day in November and December of the novel I am working on.  Here’s an update on my progress. 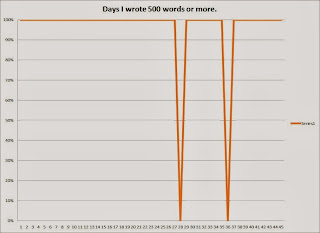 I’ve missed two days.  One was Thanksgiving, which had me going from 6:15 in the morning to 9:30 at night.  In all that activity, I completely forgot to write. I woke up suddenly at 11:30 the night of Thanksgiving, was stricken by breaking my streak, and then decided to stay in bed instead of hauling myself out to bang out 500 words.  The other day was a game night we hosted.  I miscalculated just how long the gaming would go on.  It was a very long and hard day, and by the time it was 11:15 and I had the choice of writing or bed, I chose bed.  In general, it has been no trouble to find the time to write, though Fridays and weekends are more difficult because my time is not as scheduled as on the other days of the week.  I’ve had a few sessions of cranking out the words and then going straight to bed because of this. 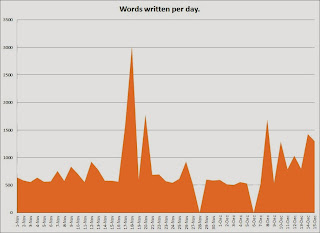 I’ve done a good job of meeting my words written per day goal of 500 words.  Only one day did I write exactly 500 words, every other day I wrote, I exceeded the goal, including one day where I wrote 3400 words.  I was suspicious of that outlier, but I went back and double checked and indeed, I churned that day. 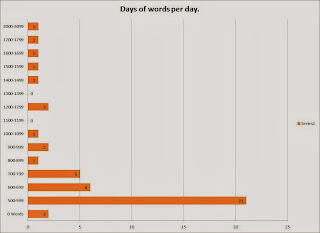 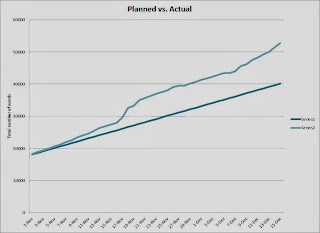 All that writing is adding up.  When I set my goal of 500 words per day, I accepted the fact that I would “only” have 48,000 words by December 31.  This was seen as lesser achievement because in order to “win” National Novel Writing Month (NaNoWriMo) you need to write 50,000 words between November 1 and  November 31.  I was beginning with a bank of 17,000 words and taking two months and still coming up short.  But I’m happy to report that exceeded my original writing goal on December 11 and I crossed over the 50,000 word mark on December 13.
Overall, I’m quite pleased with my progress.  The book is still fun to write, I’m chugging along and the rest of my life hasn’t been thrown out of control.  Plus I get to make nerdy Excel charts as explanation.  Win-win.