Wordstock is Portland’s Festival of Words and I managed to attend this year’s event.  I always forget to put it on my calendar and then have too much going, but this year I made it there.

Walking around the exhibit hall, I saw the great scarves with words from famous literature on them. 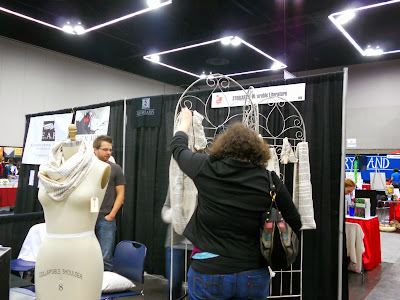 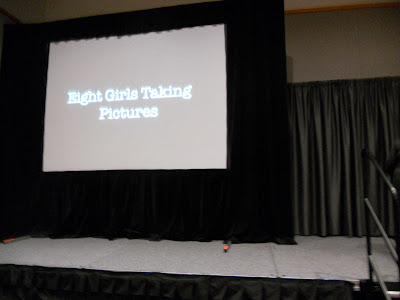 Here she is.  Here novel is fictionalized portrayal of different women photographers in the 20th century. 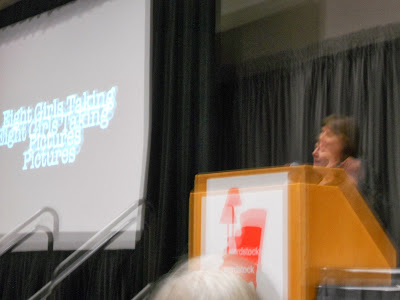 This panel was called “A Songwriter, a Novelist, and Some Poets Walk Into a Bar.”  Great title, lousy panel.  It started off badly when one of the poets disregarded the question asked, said, “I express myself best through what I write.” She the proceeded to read an endless poem.  It must have been four single-spaced pages at least.  It went downhill from there.
From my notes:  the poet is pretty much confirming the general belief that poetry is inaccessible.  She is reading what she wrote and I’m not sure when she started writing this, but it is very long.  And it is not accessible.  We, in the audience, are lucky as we can process this out of view, but her four panelists are stuck in full view of us and are tasked with keeping a straight face.
Whew.  Over. 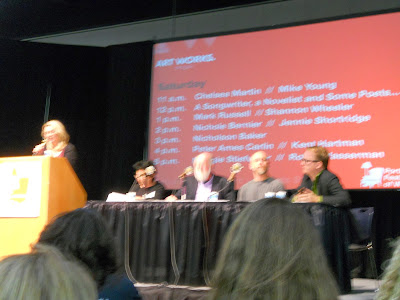 Karen Karbo and Kim Dower told us about Publicity and Publishing Secrets No Author Can Afford to Live Without (and Some Gossip, too!)  They were hilarious.  I was already a Karen Karbo fan, and I liked Kim Dower so much I bought a book of her poetry. 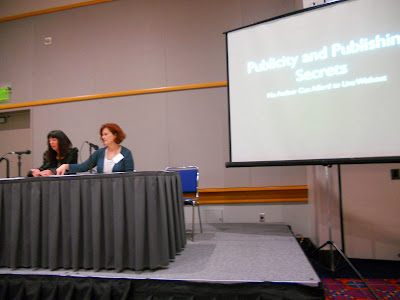 At the “Captivated by Contemporary” I noticed a local author. Laini Taylor.  I’m usually horrible at noticing famous people in my midst, but the hair helps.  That’s her in the pink. 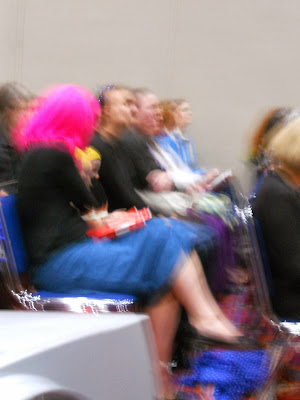 “Captivated by Contemporary” was a great panel full of four YA authors, only one of which I have read, though I quickly remedied that situation.  Stephanie Perkins (Anna and the French Kiss) moderated and I was introduced to Corey Ann Haydu, Miranda Kenneally and Gayle Forman.  Remember Gayle Forman’s name.  She will come up again soon.  Stephanie Perkins was the best moderator of the panels I saw.  Her questions were insightful and fun.  She was also wearing a fabulous dress and incredibly cute shoes.

Here’s what she did to run such a fabulous panel.  She had four clear topics:  Parents, Friendships, Love Story vs. Romance, Sex.  (“I feel like we’re on a date” Gayle Forman quipped)  Those broad categories gave her panelists a lot of room to talk, so good things were said.  Then she opened it up for questions. 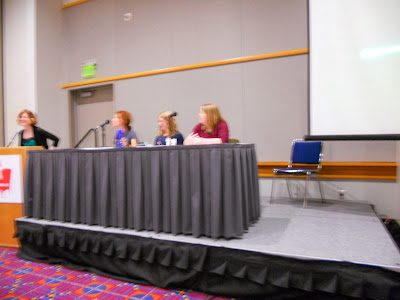 The crew waiting for the “Literature Online:  Publishing New Fiction on the Web” panel.  “All white dudes.” remarked the white dude on the right. 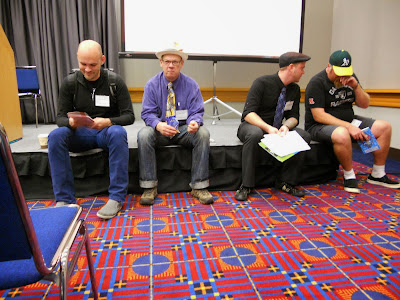 This woman was captivated by the words on the face. 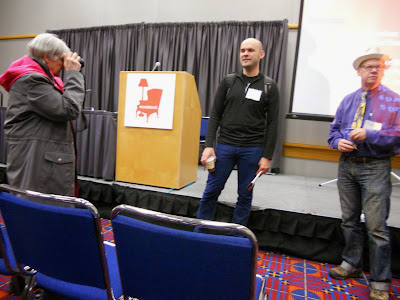 The white dudes in action.
From my notes: 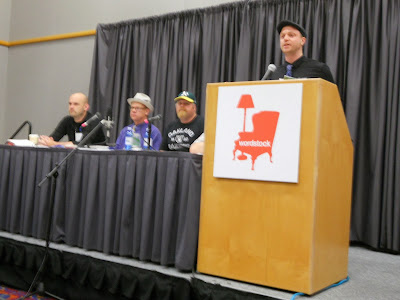 I then attended a hideous writing workshop which I paid for, but no need to go into that. Overall, it was a good day.